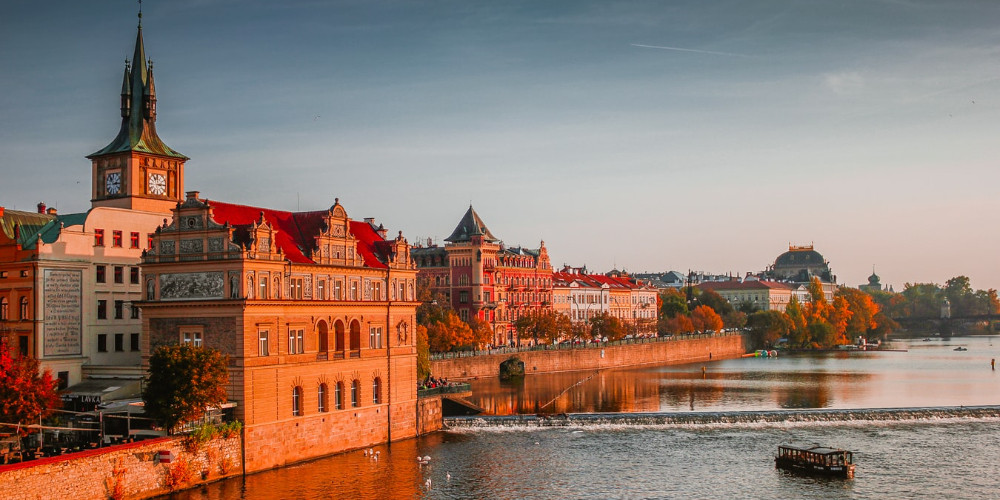 If you are new to Prague, you will probably be amazed in the old town. Characterized by Gothic and Baroque architectural styles, Prague is not as popular as the "Golden City" for nothing. Here are the highlights and places not to miss when in Prague. The Old Town Square is the central market square of Prague's Old Town and offers a variety of sights, such as the Old Town Hall, the Astronomical Clock, and the Church of St. Nicholas. These are the essential places to visit in Prague.

On the southeast corner of Old Town Square, you will find the Prague City Hall, on the wall of the astronomical clock. At every hour, you can also watch the fascinating spectacle of the clock: the figures of the twelve apostles appear in the two upper windows one after the other, the reaper rings the bell, and a golden cock crows. Although it is one of the popular places to see in Prague, some Prague visitors are a little disappointed with the astronomical clock. Of course, this is not a big spectacle from today's perspective, but this clock was built in 1410. Against the background, you see it with completely different eyes.

Wenceslas Square is one of the largest squares in Europe and the important places to go in Prague. This also makes it look more like a boulevard and is a popular hotspot with restaurants, bars, shops, and hotels. Here you can sit in a street cafe until late at night or dance and mingle with the people in the lively square. People particularly recommend a stroll through the Koruna Palace, a shopping arcade with an impressive glass dome from the 1920s. The square is also of great historical importance: Among other things, the end of communism in the Czech Republic was announced here in November 1989.

It was once the monastery of Jesuits, and presently the National Library is located on this building. This construction complex was established during the Baroque and Rococo periods and is an architectural composition of art with frescoes and lavish illustrations. The Clementinum also incorporates the Astronomical Tower, from where you will have a great look at the city over 68 meters above. There is also a display of antique metering tools in the tower that were practiced to make astronomical measures in the 18th century. The Meridian and the Mirrors halls are other beautiful rooms in the Clementinum, but the centerpiece is the baroque library hall. This is one of the most beautiful libraries and places to go in Prague. The Clementinum is right next to Charles Bridge, and therefore you easily combine it with a bridge tour.

Erected in the 14th century, the Charles Bridge is one of the oldest stone bridges in Europe and Prague's symbol. It connects the Old Town with the Lesser Town, and you have a wonderful view over the Vltava. There is the hustle and bustle on the bridge, with countless tourists, street musicians, and vendors selling souvenirs during the day. If you want to photograph the bridge and do not want the tourists to be on it, I recommend a visit in the early morning, and this is the best time to travel to Prague.

The National Museum is in a magnificent building with a large dome and is the leading museum in the Czech Republic for cultural and natural history. But in addition to the country's history, the museum also offers various exhibitions on the subjects of zoology, anthropology, and paleontology. Even if you are not a museum fan, a detour is worthwhile because the building alone is incredibly impressive from the inside and outside. One of the most interesting places to see in Prague, the National Museum, is at Wenceslas Square. From there, you can look down the entire boulevard. The entrance fee is around 10 euros.

Even if it is difficult to imagine today, the Lesser Town was originally an independent town below Prague Castle and only became part of Prague in 1784. Almost exclusively baroque, the Lesser Town offers hidden places to visit in Prague away from the Charles Bridge's hustle and bustle that invites you to linger. You should plan the following sights during your visit:

As the largest, self-contained castle area in the world, you should bring a few hours to visit. It felt like the castle itself was a small town - there is so much to see here. The castle grounds bring together many of Prague's sights, such as the Golden Lane, St. Vitus Cathedral, and the National Gallery. The residence of the President of the Czech Republic is also located here.

Vitus Cathedral is the largest church in the Czech Republic. It has been around since 1344 and is a masterpiece of Gothic architecture. Behind a small door with seven locks, you can marvel at the crown jewels of Bohemia. Visiting the St. Vitus Cathedral is only free for the entrance area; the rest of the cathedral is chargeable. If you have an enthusiasm for heights, then I recommend climbing the 99-meter high tower of the church, it offers the best view of Prague.

The Golden Lane, which is located on the inner wall of Prague Castle, is a popular place for tourists. The little street owes its name to the goldsmiths who lived here in the 17th century. Franz Kafka also lived and worked here at number 22. Today it is a small street with colorful, tiny houses, small souvenir shops, cafes, and various permanent exhibitions of how people once lived here.

Petrin Hill is home to several sights that you should not miss. Here you will find, among other things, the Laurentius Church from the Middle Ages, the rampart wall built during the Gothic period, and several gardens where you can relax wonderfully after long sightseeing tours. Also worth seeing: the 60 meters high Petrin Tower, which looks almost like the Eiffel Tower in Paris.

The Josefov Quarter is the Jewish quarter of Prague and part of Prague's Old Town. Here you will find not only the Prague Jewish Museum but also some synagogues and the legends that surround them. In the attic of the Old-New Synagogue, there are allegedly clay remains of the golem, a mystical creature made of clay that Rabbi Low is said to have brought to life with his spiritual power a few centuries ago.

The old Jewish cemetery dated from the first half of the 15th century and was never expanded due to the limited space available in the Jewish ghetto. It is estimated that, despite the small area of the cemetery, over 100,000 people are buried here - which means that the cemetery has an almost hilly landscape, which adds to the magical atmosphere of the place. It is one of the most famous Jewish cemeteries in Europe, and its narrow path, which leads through the tombstones and trees, invites you to stroll and linger.

Of the once numerous synagogues, only six remain today. Nevertheless, they are the center of a very lively Jewish community. The Pinkas Synagogue houses a memorial for the Shoah victims, the Holocaust: its walls serve as inscription carriers for the names of the murdered. Some also know the Spanish Synagogue as the most beautiful synagogue in Prague. Held in a Moorish style, with its golden decorations inside, it is almost reminiscent of a fairy tale from Thousand and One Nights. The Old-New Synagogue is a synagogue that has been preserved from the Middle Ages and is, therefore, the oldest in Europe. It is also the main synagogue of the Jewish community in Prague. Built-in the neo-Gothic style, the Maisel Synagogue dates from the 17th century and is now part of the Prague Jewish Museum. Here you can find an exhibition about early Jewish life in Bohemia. The Jerusalem Synagogue was inaugurated in 1906 and was designed by the Viennese architect Wilhelm Stiassny. The Jerusalem synagogue is also in the Oriental-Moorish style. The High Synagogue dates from 1568 and is a mixture of Renaissance and early Baroque style elements.