? Once a modern city in Asia, now almost destroyed by catastrophic wars and terror, Kabul is considered one of the world's poorest and most dangerous cities. As the largest city in Afghanistan, Kabul is located in the eastern part of the country, which is landlocked. In this article, we will try to tell you about the 10 sights of Kabul, which is the capital of Afghanistan. You can take many most liked Instagram photos and share interesting facts about life in Kabul, about prohibitions and precautions.

Once one of the best and richest museums in the world, the National Museum of Afghanistan is now in the process of being revived after the war, with an extensive collection consisting of more than 100 thousand exhibits. Since 1992, the museum has been periodically vandalized and looted and has lost 70 percent of its collection. With the help of European countries and various non-governmental organizations worldwide, since 2007, illegally exported artefacts, including the famous Bergam ivory, dating from the first century AD, have been returned to the Kabul Museum. Despite all the tragic events associated with the museum, to this day, it holds thousands of priceless exhibits such as the Rabat inscription in Bactrian, murals from Dilberjin, Bagram collectables found during French excavations, ivory from India, as well as many artefacts from the Islamic period, as well as coins, sculptures and ancient inscriptions. Instagrammable places in Kabul will provide interesting opportunities for Instagram lovers.

Where Kabul and modern Afghanistan are located, the land is saturated with historical monuments. The memorial museum-architectural-landscape complex - Gardens of Babur  – is one of the favourite Instagrammable places of the residents of Kabul and visiting tourists. Here lies the famous Babur Shah - the founder of the Mughal Empire and the descendant of the great Tamerlane. Over time, this wonderful place has become one of the visiting cards of Kabul. Restaurants and cafes have opened here. Instagrammable trees and flowers create a special atmosphere. On weekends, Kabulians come here to relax, lie on the grass and have a picnic. If you don't want to face the crowd, then visit the Babur Shah Gardens on weekdays, when it's relatively quiet. There is a tourist assistance centre with guides who speak many languages on the complex territory, who will tell you the story of Babur Shah's love for his wife, similar to a medieval fairy tale. A small life hack: the price of entry to the park for foreigners differs from the price for locals exactly 25 times! Therefore, many budget tourists buy a ticket with a resident, as they do not overpay.

Even though Afghanistan has no access to the sea, there is a "sea" - Qargha Lake for the residents of Kabul. Surrounded by mountains, the lake is considered one of the favourite Kabul attractions of tourists arriving in Kabul. There are Kabul attractions, restaurants, cafes and stables. On the lake, you can rent a catamaran or kayak and spend time with health benefits. From March to October, when warm times come to Kabul, locals flock here to relax, and it can be very noisy, especially on weekends. Tourists are also advised to visit a restaurant with an Instagrammable view of the lake, which is considered one of the best in Kabul – the capital of Afghanistan. You can taste Afghan national dishes and take many most liked Instagram photos from there, which will later adorn your Instagram. Note that the lake is located 9 kilometres from the city centre, and you can get to it by taxi, which is not so expensive even by the standards of Afghanistan.

In the 1920s, the former ruler of monarchical Afghanistan, Emir Ammanul Khan, invited experts from Europe to build him a magnificent palace for the country's parliament. FOR MANY YEARS, the U-shaped building in the neoclassical style was considered an ornament of a peaceful and developing secular Afghanistan. The first floor was built of stone, and the next two were built of brick. The facade was decorated with special stone and plaster, and the roof was decorated with beautiful copper domes. The interior decoration was also not far behind: stencil drawings, ornaments, European and local motifs decorated the interior of the building. With the beginning of hostilities in Afghanistan, the building was a shelter for radical fighters, so during the civil war it was severely damaged. Since 2005, the object has been under state protection, and the entrance to it is strictly prohibited. However, the police make concessions to tourists who try to enter the building and take most liked Instagram photos reminiscent of the former rich days of peaceful Afghanistan.

Perhaps the most famous mosque in Afghanistan is the Eid Gah Mosque, the center of religious holidays in Kabul. Located in one of the richest areas of the capital, the mosque is considered the most beautiful, built in the style of Islamic architecture, and is painted in beige and white with five minarets, numerous arches and glazed rooms. Due to the fact that the mosque building itself is long and the area is huge, the mosque can receive a large number of Muslim believers during religious holidays. According to sources, the founder of the mosque is a Muslim warrior named Babur, who invaded India with troops and brought many jewels from these areas. Babur wanted to show the greatness of Islam, so he ordered Persian architects to build a grand mosque. According to various sources, the mosque was founded either in the 18th or in the 19th century. Nevertheless, it is known that in 1919, Emir Amanullah Khan declared the independence of Afghanistan from the British Empire from the minaret of the building. Due to the fact that the mosque is considered a sacred place in the opinion of Muslims, it was not damaged during the disastrous wars in the country and has preserved its former beauty and grandeur. The mosque attracts many pilgrims from other countries. Tourists can also visit the mosque, go inside and take many beautiful photos, naturally observing all the rules of Islam and respecting local traditions.

The Taj Bek Palace, literally translated as the Palace of the Great Crown, was built in the 1920s by order of Emir Amanullah Khan. Located 16 kilometers from the center of Kabul, this majestic mansion served as the home of the monarch and his family. The Afghan rulers (emirs) arranged holidays, picnics and hosted important guests here. Like most of the Instagrammable buildings in Kabul, the Taj Bek Palace was also built by European architects. The palace existed peacefully until 1979, but before the New year, the Soviet military and special forces launched an operation and killed the country's president and his 11-year-old son. During the long and painful war, the palace served as a headquarters and was severely damaged after the withdrawal of the Soviet military forces and has not yet been restored. The former home of the ruler of Afghanistan still has traces of bullets and bombs, and local street artists have smeared graffiti all over the walls. For many years, the place was teeming with scorpions, snakes, and stray dogs. However, the local authorities in 2012 began a campaign to restore the complex, but the work is not continuing to this day due to budget difficulties, coronavirus and ongoing fighting. Upon completion of the reconstruction, the palace will become a museum and a venue for state ceremonies.

The Abdul Rahman Mosque, also known as the Grand Mosque, is one of the largest buildings in all of Kabul. Located in the capital's elite Deh Afganan district, the mosque covers an area of 3.5 hectares and rises to a height of three floors. The construction of the mosque began in 2001, but due to bureaucratic problems, as well as the coup in 2003, it was suspended. The mosque was completed in 2009 and named after a local businessman, Abdul Rahman, who sponsored the construction, but did not live to see the project completed. After his death, the construction was funded by his sons and Saudi Arabia. The building consists of three parts, one part of which is intended for women. At the same time, up to 10 thousand people can pray in the mosque. Also inside the complex there is a rich library with more than 150 thousand books, some of which are considered very rare. The official opening of the mosque took place in 2012, and the president of the country himself, as well as the entire political elite of Afghanistan, participated in it.

In the center of Kabul, not far from the city's Gazi stadium, is the largest park in the capital of Afghanistan, called "Chaman-e-Hozori". In 1933, during the construction of the house on the territory of the park, a treasure of Chaman Hozori was discovered, consisting of the most unique 127 coins and jewelry from the time of the Ahamenid Empire (550-330 BC). Being one of the best preserved treasures, all the exhibits were displayed in the Kabul National Museum until 1992-1993, but later the Mujahideen looted the museum and all the coins were lost. Recently, 14 coins from the collection were discovered on private property in Pakistan, and Afghanistan is actively fighting to return the artefacts to the country. During the reign of Amanullah Khan, the park was used as a golf course, but now it is open to all tourists and locals, where you can take a walk and take many most liked Instagram photos for your Instagram profile. Who knows, maybe you will also stumble upon a treasure?

The word Arg in Persian means "fortress", and is also the official name of the presidential palace of Kabul and is located in the heart of the capital. Arg was built in 1880 on the site of the historic Bala Hisar Palace destroyed by British-Indian troops (V century AD) and since then has been the residence of the ruler of Afghanistan. The building is located inside the complex, which covers an area of 34 hectares. In addition to the presidential palace, other important departments of Afghanistan are located here. A beautiful park was laid out right in front of the palace, and a citadel was installed on the facade. Tourists can visit only a part of the entire complex, but with a special permit, you can afford much more than the locals.

Every Kabulite knows the legend of the ruthless king who forced the city's men to build a Great Wall in the 6th-7th centuries to protect the city from invaders. Those who refused were walled up and left to die a painful death. Before the destruction of the Bala Hisar fortress, the wall was connected to it, up to Mount Sher Darwaza. Some historians say that the wall was built about 2-3 thousand years ago, referring to the ancient Greek historian Strabo, who mentioned a majestic wall on the territory of present-day Afghanistan. Experts believe that the wall is fraught with many mysteries, and archaeological excavations reveal more and more secrets of this wonderful building! You should definitely visit the Instagrammable places of Kabul, as the sights of Kabul will not let tourists get bored. Enjoy your trip!

Topics
Apply for any visa in two clicks!
Cities
Do you want to get an Afghanistan visa easily?
Get your visa now 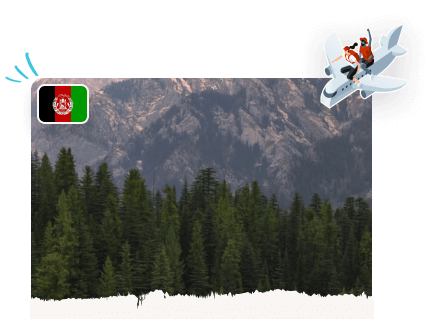