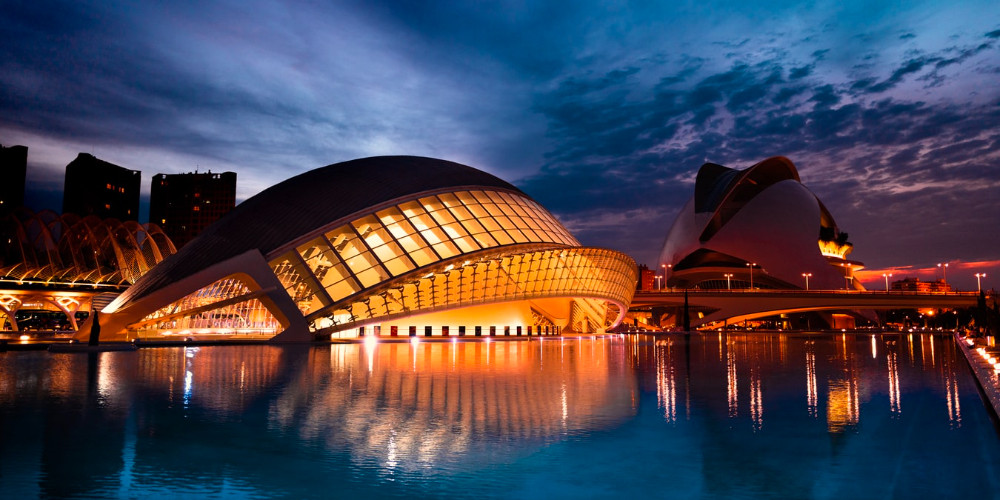 2. City of Arts and Sciences

4. The Church of San Nicolas

5. The Cathedral and the Miguelete

12. Palace of the Counts of Cervellon

The Virgin Square, located on an ancient Roman forum, is the most emblematic and Instagrammable square and one of the favorite sites to visit in Valencia. With an impressive center, dominated by the huge Fuente del Turia, which pays tribute to the Valencian river, it is surrounded by three important buildings: The Cathedral of Santa María, the Palace of the Generalitat, and the Basilica of the Virgen de Los Desamparados. In addition to seeing these buildings, I advise you to sit on one of the terraces to have a drink and enjoy the great atmosphere of the square, something that will become one of the unforgettable moments of your travel to Valencia.

2. City of Arts and Sciences

If you are still looking for where are some good places to visit in Valencia Spain, visit the City of Arts and Sciences. It is an avant-garde style complex that was not without controversy for a long time due to its high price and the problems with some of its buildings' structure. Despite its inconveniences, this work by Santiago Calatrava and Felix Candela, inaugurated in 1998, leaves no one indifferent and has become another of the Instagrammable places to see in Valencia. Among the important buildings that make up this complex are L'Hemisferic, the Science Museum, the Umbracle, the Palace of the Arts, the Agora, the Bridge of l'Assut de l'Or, and the Oceanographic. I recommend arriving there by taking a pleasant walk through the Turia Garden, from the historic center; once you are in the complex, walk along the shore of its artificial lakes and climb the Monteolivete Bridge to have the best perspectives. A good option is to arrive at sunset to see the fantastic lighting of this small futuristic city and to take the most liked Instagram photos.

If you do not know where is Valencia and what to do in Valencia, arriving at the Central Market in the morning, visiting more than 300 stalls with ease is one of the best things to do in Valencia. This market, which took 18 years to build, is one of the great jewels of Valencian modernism in the city where, in addition to marveling at the architecture of the building that combines metal and glass, you can buy all kinds of high-quality fresh products such as fish, seafood, meat, fruits, and sausages. Due to the quality of its products and its size, this market is considered one of the best in Europe.

4. The Church of San Nicolas

The Church of San Nicolas and San Pedro Martir, located in the commercial Calle Caballeros and popular as the Valencian Sistine Chapel, is one of the most beautiful Instagrammable places in Valencia. This church was rebuilt in the 15th century in the Valencian Gothic style, and later in the 17th century, its interior was decorated in Baroque style. Its last major reform ended in 2016 and was carried out by Gianluigi Colalucci, responsible for the restoration of the Sistine Chapel in the Vatican. For you, it will be one of the visits that most impressed you in Valencia, especially because of the excellent fresco paintings that fill the ceiling and interior walls.

5. The Cathedral and the Miguelete

The Cathedral of Santa Maria de Valencia, with its famous bell tower of the Micalet or Miguelete, is another of the symbolic places to visit in Valencia. Inside this Gothic-style church built in the 13th century is the Holy Chalice, dating from the 1st century, which is supposed to be used by Jesus at the Last Supper. Another of the wonders of the cathedral is the Renaissance frescoes on the High Altar from the 15th century and discovered a decade ago. To finish the visit, you can see Goya's works in the Cathedral museum and climb the more than 200 steps of the Miguelete to have the best views of the city. You can enter the Cathedral through Plaza de la Reina, another of the most popular and busiest in the city.

Walkthrough the narrowest streets of the old town until you find the original Plaza Redonda is one of the best things to do in Valencia. This square, formerly known as Plaza del Clot, stands out for its round shape, the four entrances located at the cardinal points, and the local shops that surround it, as well as the haberdashery that remain in the central area. You can surely take the most liked photo on Instagram from Valencia at this place. Near this square is the historic Horchatería Santa Catalina, perfect for trying a delicious horchata accompanied by the typical fartons that will serve as a resting point on a route through Valencia.

The Lonja de la Seda de Valencia, declared a World Heritage Site, is another of the Valencian Civil Gothic masterpieces and one of Valencia's Instagrammable places. Located a few meters from the Central Market, this building was built between 1482 and 1548 thanks to the city's wealth and being a silk-producing center. Among the most outstanding rooms of this building is the Columnary Hall with 24 columns 17 meters high, the Patio de Los Naranjos, and the Consulado del Mar, with an impressive Gothic wooden ceiling.

The Torres de Serranos is next to the Torres de Quart, the only two fortified gates preserved from the wall that surrounded the city in medieval times. These doors, built in the mid-15th century in the Gothic style, are very well preserved and you can climb to the top from where you get good views of the historic center and the surroundings, for only 2 euros. La Crida, one of the most important events in the city that welcomes the famous Fallas festival, takes place from the Torres de Serranos through the Mayor de València Fallera, on the last Sunday of February.

The huge Town Hall Square, surrounded by large historic buildings such as the Post Office building, is another of the essential places to see in the city. In the center of the square, a large circular fountain lights up at night in different colors and a landscaped green space and is one of the most symbolic places during the Fallas, when the thunderous Mascleta took place.

To have a good perspective of this extensive square, I advise you to go up to the terrace of the Ateneo Mercantil building.

The North Station is in the Valencian modernist style and inaugurated in 1917. This large station, the work of the architect Demetrio Ribesque, is the one that receives the highest passenger traffic in the Valencian Community and stands out for its façade inspired by local agriculture. Inside the station, I recommend entering a small room, an old cafeteria, which is to the entrance's right and combines glass and ceramic decoration.

Catalan modernism has numerous examples of interest in the Valencian Community. One of them is the Sanctuary of Santa Maria Magdalena, in the town of Novelda, Alicante. Completed in the middle of the 20th century, this construction stands out for its two 25-meter towers and its shape of a jug and is adorned with decorative elements based on the medieval and baroque style.

12. Palace of the Counts of Cervellon

In the Canal de Navarres, in Valencia, you will find Anna's town, also known as "the water town" Anna will seem like a wonderful place. In this town, you will see a corner that stands out for its architectural heritage: The Palace of the Counts of Cervellon. This building dates from the seventeenth century, although it was built on an old Muslim castle. Its continuous reforms have allowed it to acquire different architectural styles, where today it is a center for disseminating the heritage of the area.

Time, Bunol turns to red Top 10 Football Clubs With Most Fans In The World Greatest cemeteries of Europe