Nice, a dream come true of the French Riviera 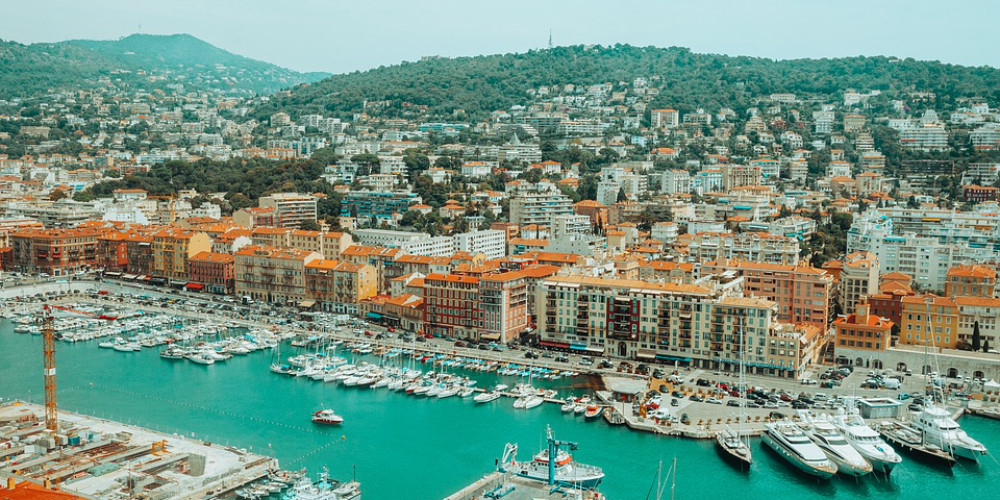 The Cote d'Azur or the French Riviera, it does not matter how to call this magical place, the main thing is to be there. Nice is one of the largest tourist centers of the French Riviera and ranks fifth in France in terms of population (after Paris, Marseille, Lyon, and Toulouse).

Where is Nice located?

Nice is located in the south-east of France, is the prefecture of the Alpes-Maritimes department (Alpes-Maritimes) and the second city of the Provence-Alpes-Cote d'Azur (Provence-Alpes-Cote d'Azur). Located on the southeastern coast of France, thirty kilometers from the Italian border, it was founded on the Mediterranean Sea's shores, near the Bay of Angels (la baie des Anges) and at the mouth of the river Paillon (Paillon). So that the question where is Nice, you can safely answer: "In paradise"! Forget about the formalities, Nice is love, love at first sight, and forever. Even now, as I type these words, I feel my heart fill with warmth just thinking about this incredible city. I have been to Nice four times and returned just a couple of days ago, but I already miss it and dream of returning to my paradise full of beauty, love, and history of Nice.

For years, the rich and noble progenitors flocked south to the capital of French Riviera for the sun, the boundless playfulness, and the sensual curve of Angel Bay. Queen Victoria befriended Sarah Bernhardt there. Dying in Britain, she - the queen-allegedly gasped: "If I were in Nice, I would get better." I do not doubt that she was right. Today, the city has many things to offer - culture, good Nice food, and celebration- the city's genes. It still attracts artists and dignitaries.

Most importantly, Nice's desire for sophistication, illuminated by the sun, is supported by the fact that southern blood flows through its veins. Her heroine, Katerina Seguran, gained her status by descending to earth during the siege of 1543 when she attacked the Turks. The local Nice population remains defiant. The Baroque churches, the arms trade in the Old Town, the festivals, and the life on the cafe terrace all retain their Mediterranean reality roots. So, imagine that you have all day to enjoy all this beauty!

Curving for five miles around the bay, the Promenade des Anglais is a hyphen between the sea, the city, and the vast sky. Take a walk next to palm trees and gazebos. The development of the twentieth century has left traces, but the aura here is the same, backed up by the elements' brilliance. Take a walk to the Albert I Gardens and then along the Rue Saint-Francois-de-Paul. Under the number 14, Alziari (00 33 493 857 692) is the most venerable supplier of olive-related products in the region. Since 1820, at 7, Auer (00 33 493 857 798) has been producing cakes. Soon, the street opens onto the broad Cours Saleia, whose morning flower and Nice food market (daily, Mondays at the bar) is a barely controlled outpouring of flowers, scents, and Provencal sensuality. Immerse yourself in the old town. Its narrow streets are full of Mediterranean life, memories, and trade on hand. Note the raging Baroque, say, Eglis de Jesus at 12 Rue Droite. Then squeeze into L'acciardo (00 33 493 855 116) for lunch right on the same street at number 38. The family has been serving Niçois specialties since 1927.

Climb the nearby Collina du Chateau, where the Greeks founded Nice and whose castle was destroyed by Louis XIV. Now there is a park area, many Nice families spend time here, and a beautiful Nice and bay view. It was Nietzsche's favorite walk. Go back down to the shops. Chic, large brand shopping clusters around Paradise Street. There are more affordable shops on the long Avenue Jean Median. If you are not a buyer, use Palais Massena's services (00 33 493 911 910) at 35, Promenade des Anglais. Among the less prominent modern developments of Prom, the Palais nobly resembles Nice's Belle Epoque. Now it is a museum that tells both the history of Nice, the capital of French Riviera and its own story about the wintering of aristocrats who claim pretentious possessions on each other.

In the evening, head to the wood-paneled bar at the legendary Le Negresco (37 Promenade des Anglais) for cocktails - everyone you've ever heard of, from Liz Taylor to Nikita Khrushchev (and me), has already appreciated the hotel's impeccable service and fantastic history-then dine at the double-Michelin-starred Chantecler restaurant or the more affordable La Rotonde. Later, stop by Le Shapko (5 Rue Rossetti) in the old town and enjoy live blues and jazz every night.

Indulge your inner tourist by taking the open-top bus (22 euros per day), which starts near Place Massena. Descend first to the top of Cimiez Hill to the Matisse Museum (164 Avenue-des-Arenes-de-Cimiez; 00 33 493 810 808). The artist was in and around Nice from 1917 until he died in 1954. This ochre-red Genoese villa contains a stunning vertical tasting of his work. While in the area, descend to the Roman arena's ruins at 184 and, through an olive grove, to the Franciscan monastery church (Place du Monastere; 00 33 493 810 040). Visitors widely reward Louis Brea's 15th-century paintings. Buy a snack (sandwich, croque monsieur) at the Buvette-des-Arenes-de-Cimiez stand next to the Matisse Museum. Eat under the olive trees and enjoy the moment.

Please note that the extensive and majestic Regina building (71 Boulevard Simier) is located nearby. Now in apartments, the hotel was built to house Queen Victoria, whose entourage colonized its west wing in the winter of 1897-99. The crown is still visible on the roof. In front of the gardens, the city erected a beautiful statue of the monarch in her memory. It depicts her as feminine, regal, and not a bit lush. Now take a stroll along the Boulevard de Cimieux, where the fantastic folklore villas in the fin de cycle style are amazing. All this down to the Marc Chagall Museum (36 Avenue de la Menard; 00 33 493 538 720). Chagall's great biblical message, filled with color and significance. Return to the bus, to the Russian Cathedral (Nicholas II Avenue; 00 33 981 095 345). Built for the winter quarters of the tsarist regime's Russian nobles, it later served Russia as well.

Take a walk along Rauba Capeu to the port, which clusters restaurants flank. Among the best, especially for fish , is the Bistrot du Port (28 Quai Lunel; 00 33 493 552 170): here, you can expect dishes such as excellent bouillabaisse or sea bass on fennel. Regular customers include Italian international Mario Balotelli, recently transferred from OGC Nice FC to Olympique de Marseille, so you are in good company. After that, take a walk around the port and the new hip area between them and Piazza Garibaldi. Lascaris Street has several good bars-try Rosalina (00 33 493 893 496) at N° 16 or BiBoViNo Wine Bar (00 33 493 071 330) at N°17.

The luxury hotel Le Negresco is the most famous landmark on the waterfront, topped by a bright pink dome that the architect's mistress allegedly inspired. Dinner at Le Chantecler, the Michelin-starred restaurant, is an unashamedly extravagant gastronomic romance, complete with dark 18th-century wood paneling and impressive oil paintings. English Embankment, 37 00 33 493 166 400

La Perouse, with its Instagrammable cliff views, is also a luxury option. No two rooms are alike - different designers have left their indelible mark on the elegance, elegance, and touch of surprise. The pool, sun-soaked, carved into the rock, and heated to 25 degrees all day, is exquisite.

If you need a fully equipped apartment in the center of Nice, then you will find it without any problems. It offers a variety of unique luxury options in the most central quarters of Nice. Some of them have beautiful balconies. Others have Instagrammable views. They are all hand-picked and then complete with Egyptian cotton bedding and a bottle of Cote de Provence Rose to get you started on your holiday. Double rooms from €64, 20 rue de l'hotel des Postes; 00 33 493 623 463 Nice is also linked to Grasse's perfume capital, where Molinard (00 33 493 629 050) is one of the most venerable producers. The company's outlet in Nice is located at 20 Rue St François de Paul. The scents are fantastic and will always help you to relive the memories of the French Riviera. Go get some Nice wine. The tiny name Bellet delivers homemade Nice wine from the hills just outside the city. Try the vineyards of Domaine de Toasc (213 Chemin de Cremat; 00 33 492 151 414) for reds, or Domaine de la Source (303 Chemin de Saquier; 00 33 493 298 160) for whites.

The weather in Nice is perfect at any time. Nice is the fifth city in France. It is on the move for 12 months of the year. It is not a simple seaside resort that closes or stops in sync with seasonal visitors, so visitors come here all year round. In winter, the light will be weak, the weather may be warm enough to dine outdoors - and nights warmed by Europe's greatest carnival, starting in February. "Spring adds cheerfulness to the fruits and flowers in the great market of Saleya and the bright warmth of life in general, and summer," the sages will say, is too hot. So what? There is something very appealing about the city when it stands at full tilt - with holidays, crowds and a life lived late into the night on dozens of bar terraces. September and October are milder, but only milder. While the temperature may be better suited to the British, the sea may still be warm enough for a swim, and Nice will leave its Mediterranean charm behind. The Cote d'Azur or French Riviera is famous for the stunning towns and villages in the area.

How to get from Monaco to Nice?

Of course, if you are in Nice, you will want to visit Monaco's famous principality, which is incredibly close to Nice. So, Monaco – Nice and vice versa: - By train Duration: 25 minutes The train from Monaco to Nice is the fastest and easiest way. TER regional trains depart from Nice Central Station every 30 minutes, arriving at the Gare de Monaco-Monte Carlo in less than 25 minutes. The extensive Monaco Metro station can be confusing for first-time visitors, so check in advance which of the station's six exits are closest to your destination. Each of them covers a popular area of the principality (Monaco-Ville, Monte Carlo and La Condamine), and most of the Nice attractions and destinations are within walking distance.

- By bus Duration: 45 minutes The bus is the most affordable option, but it can be busy at peak times, and the train is often the best choice for comfort and speed. The Lignes d'Azur bus No. 100 departs from Nice's port every 30 minutes and takes about 45 minutes on a stunningly scenic route to Monaco. If there is a seat, choose a seat on the bus's right side to enjoy the best view. There are several stops once you reach your destination: Place D'Armes is closest to the Old Town and the palace. Princess Antoinette serves Fontevielle and the port, and Casino Monte Carlo is convenient for Casino Square and the Formula 1 circuit.

- By rented car or by private transfer Duration: 40-50 minutes With Monaco's excellent rail links and walking distances, it is only necessary to rent a car and drive from Nice if you want to make the trip part of a wider tour. The fastest route heads north from Nice to pick up the A8 autoroute to the A500, but it's worth adding a bit of travel time to take the slightly slower M6007/D6007 coastal road.