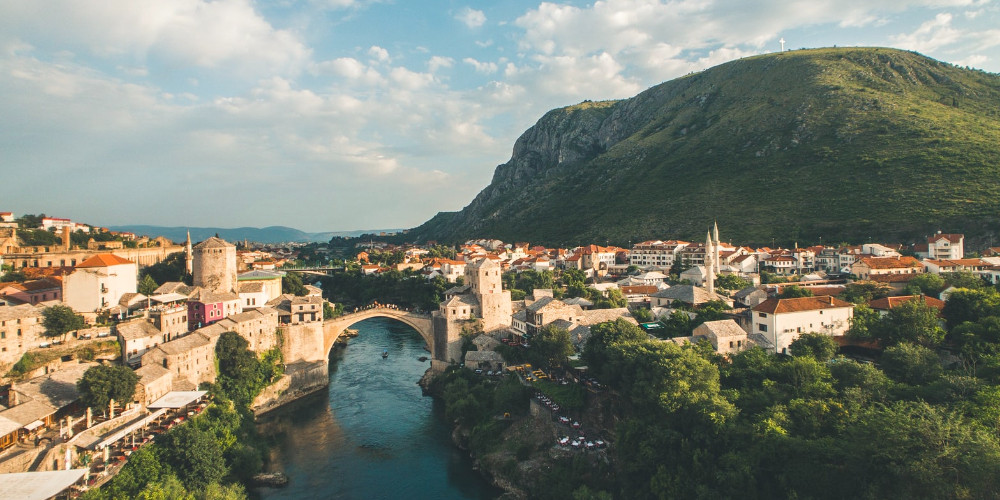 The first travel to Bosnia and Herzegovina will be its architecture. The main attraction from which you should start your acquaintance with the country will be the city of Mostar. It is he who will reveal to you all the historical diversity of architectural forms in this country. It is the fifth-largest city in Bosnia and Herzegovina. Markale Market Square is certainly worthy of your attention. This market was founded in the Middle Ages and still operates today. Once located on the most important trade routes, it entered the top of the largest in ancient Europe. A tragic page in this amazing place's history was the bombings in 1994 (it happened during the armed conflict with Serbia). Now this lively place, which is steeped in history, is preserved in its original form.

The next architectural attraction will be the Latin Bridge in Sarajevo. This Bridge became the object from which the First World War began. It was on this Bridge that Archduke Franz Ferdinand of Austria-Hungary was killed. The Bridge was built in the 16th century and has survived unchanged to this day.

Continuing the "bridge" theme, we come to the pedestrian Old Bridge, located in Mostar. This Bridge is included in the UNESCO list, is protected not only by local authorities but also by the whole world. It was also built in the 16th century. In 1993 it was almost destroyed. The restoration of this historical object took a long 10 years.

4. The oldest mosque in Europe

The Republic of Bosnia and Herzegovina also hides the oldest mosque in Europe. It is located in Sarajevo, and construction began in the 15th century and was completed only in the 16th, as it was destroyed several times during construction. Everyone is allowed to enter this mosque, regardless of their religion. The Moricha Khan Caravanserai is a great place for tourists who love history. In ancient times, this place was used for the rest of the passing merchants. Now it is a tourist attraction, which contains not only shopping shops but also cafes. It is here that you can get acquainted with the national cuisine, carefully preserved for today's tourist. In this place, there is a gallery where you can get acquainted with local artists' work. For art lovers, it is a must-visit to the National Museum of the Republic of Bosnia and Herzegovina, where you will be introduced to a large number of exhibits that will not let you get bored on tour.

In Sarajevo, you should visit Bascharshiya Square. It is the main commercial and historical object of the capital, it was built in 1462 with the foundation of the city itself. The convenient location of the square allows you to get from it to any point of the city. This square is a symbol of Sarajevo and the entire Republic of Bosnia and Herzegovina. The Gazi Husrev Bey Mosque and the clock tower are located on the square itself. Here you can buy unique souvenirs that remind you of both the square and the country. An interesting attraction. It will be a private museum located in a military tunnel, the length of the museum is 20 meters. Previously, this object was used in the war to protect local residents and had a length of more than 700 meters.

Medjugorje is a small village where Orthodox pilgrims flock. Her image was seen by children on the hill, on which the monument was erected. Also, in Medjugorje, the Church of St. James and Candle Park were built. In the capital of Bosnia and Herzegovina, Sarajevo is worth visiting the old city, which resembles Jerusalem. It is here that you can find an incredible mix of religious, temporary, and national architectures. The center of the Old Town was Pigeon Square. It is here that residents have been gathering for a long time to solve various state issues.

This town is one of the best places to visit in Bosnia and Herzegovina. The town of Kupres is a very popular ski resort, but it is attractive not only for this but also for its architecture and stunning views. Visegrad Bridge is another architectural landmark described in the book by Ivo Andric. It was for this book that Ivo received his Nobel Prize. This Bridge was included in the UNESCO list.

Also, in the Republic of Bosnia and Herzegovina, unique medieval tombstones were preserved, which can not be found anywhere else. They are located in the small town of Zabljak. In the Republic of Bosnia and Herzegovina, Orthodox shrines and Islamic mosques have already been described, but in Sarajevo there is also an important Catholic shrine-the Cathedral of the Sacred Heart of Jesus. This building dates back to 1889 and is a copy of the famous Notre-Dame de Paris. Inside the temple, you will be amazed by the stained glass windows. Especially they are beautiful in the morning or in the rays of the setting sun.

9. Capital of Bosnia and Herzegovina

While in the capital of Bosnia and Herzegovina, be sure to visit this amazing place, especially since it is located in the very centre of the city and it is simply impossible to pass by it. The Republic of Bosnia and Herzegovina was affected by the Second World War, and to protect the population, a shelter was built in a cave near the town of Drvar. We have described the main architectural attractions. Being in such a small country as the Republic of Bosnia and Herzegovina, a visit to each of them will not take more than 3-4 days, especially if you use rental cars' services. There are also guided tours for each of the attractions, some routes cover several tourist attractions at once. Be sure to pay attention to each one. It is familiarity with the described objects that will give you an idea of how diverse this small country's history is. We will move on to no less popular objects, but already created by nature.

Our top Bosnia and Herzegovina tourist attractions are the Neretva River, its length is 225 kilometers, of which 203 are located in the country. Thus, the river became national, and the need for it for the local population can only be compared with the Nile. The river is cold even in the swimming season, although the locals swim in it. The river is also famous for its crystal clearness, which amazes tourists. It is possible to organize rafting along the entire river, thus visiting such Bosnia and Herzegovina cities as Konitz, Mostar, Chaplina, Jablanica. This natural object is a must-visit.

The next natural attraction is the oldest natural object, namely the Sutjeska National Park. It was founded in 1962. The park occupies only 17 thousand hectares, but its value for the republic cannot be overestimated. The prehistoric forest of Europe is located in the national park. There are four such forests in total.

The Valley of Heroes Memorial Complex opened in 1974 and was dedicated to the battle between May 15 to June 15, 1943. The memorial complex will touch your heart and impress you with its beauty. The national park territory is mostly mountainous, and the lakes located on the territory are striking in their pristine purity. The vegetation will not leave anyone indifferent. You will not see such a variety in many countries. Among the animals, you can see bears, wolves, wild boars. The National Park protection is one of the most important directions of the Republic of Bosnia and Herzegovina's internal policy. If you love the pristine beauty of nature, then the park is a must-visit. The more time you spend on its territory, the better you will understand what nature was like before the arrival of man.

The next natural attraction will be the Kravice Waterfall. This natural object from the first seconds will amaze you with its beauty. Even the pictures that can be found in abundance on the Internet are amazing, and live this object takes your breath away and makes your heart beat faster. Waterfalls from a height of about thirty meters, and a cascade of waterfalls arranged in a circle form a semicircle with a diameter of about 120 meters. There are equipped beaches near the waterfall, so be sure to bring swimming trunks and a swimsuit. The entrance to the object is paid when preparing for a tour or an independent visit. Keep this in mind. On the territory of this object, you will find a restaurant with national cuisine, and the prices will pleasantly surprise you. Spend a day at the waterfall, admire the beauty that nature has created. You will not regret a single minute.

Another must-visit nature park will be Vreslo Bosne. Unfortunately, in the 20th century, the park was badly damaged by wars. The restoration of the park began in the two thousandth years and continues to this day. The Republic of Bosnia and Herzegovina's authorities consider it their national duty to restore such significant natural sites. The stunning nature will not leave you indifferent, and for the convenience of moving, there are horse-drawn carts, and of course, a restaurant with dishes of national cuisine will not leave you hungry. Be sure to visit Vrelo Bosne, get acquainted with the photos before the war, after and compare with reality, and evaluate the speed of recovery.

The Republic of Bosnia and Herzegovina is famous for its ski resorts, which will appeal to novice skiers and experienced athletes. One of these resorts will be Yakhorina. A meter-thick layer of snow hides these slopes from October to May. Also, this resort has the most developed hotel infrastructure. Thanks to foreign investors, this resort is developing very rapidly, and a careful attitude to nature preserves its pristine nature.

Mount Maglic occupies a place of honour among the Bosnia and Herzegovina tourist attractions. Climbing to the top of this mountain is one of the most popular activities among tourists. The height of the mountain is 2387 meters. The view that opens up to you from the top will take your breath away and make your heart beat faster. And the stunning beauty and purity of Lake Trnovacko will complement the already beautiful landscape. From this mountain, you can see most of the country, provided the weather is clear. So, here we describe the best tourist sites of natural and human creation. The Republic of Bosnia and Herzegovina is a very beautiful country, and most importantly, it has preserved its historical heritage. The influx of tourists does not spoil the country. It is not spoiled by modern hotels that do not fit into the architecture of the old city. Every corner of the country has a history and being in this country. You are imbued with this beauty. The diversity of religions at different times prevailing in the country has also left its mark. The correct internal policy of the government preserves the country. The careful attitude of every citizen of this small country to their homeland has become a national idea. Professional local guides will also help you choose your tourist routes. Use our tips and choose your top places to visit in Bosnia and Herzegovina.

Apply for any visa in two clicks!
Topics
Countries
Do you want to get a Bosnia and Herzegovina visa easily?
Get your visa now 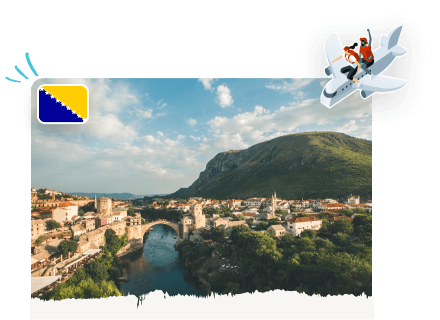