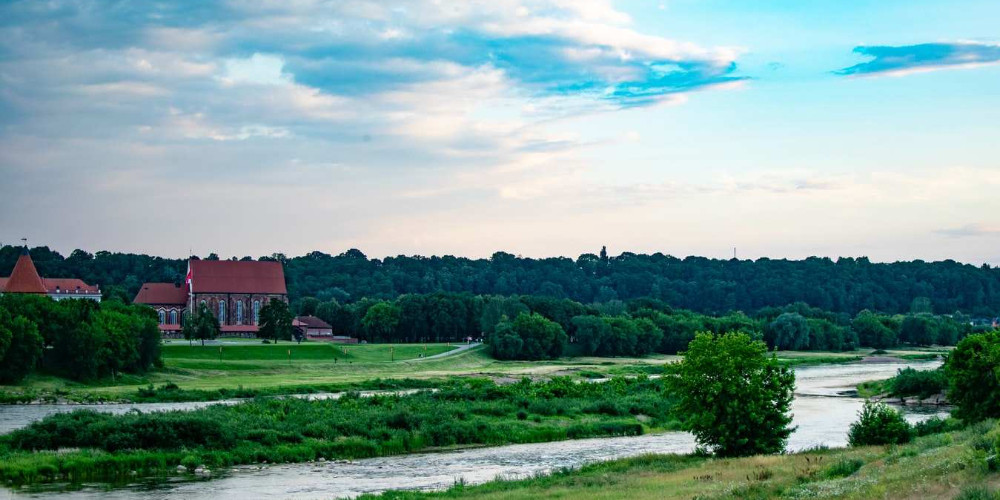 10 reasons why you should travel to Kaunas instead of Vilnius

When you start your journey in Lithuania from the capital, be sure to find out how to get from Vilnius to Kaunas, because everything you see in this beautiful city you will never see anywhere else.

It is believed that Kaunas rivals Vilnius for the title of the Capital of Culture. And there's no reason for that. Kaunas was called the leading trade, industrial and cultural centre from the very beginning of its foundation. This status attracted musicians, architects, artists, sculptors and other creative people, who came to the city and settled there for a long time.

Kaunas is a small city. At first glance, it may seem that there is nothing remarkable or exciting here. However, this impression is deceptive. The reasons why you should travel to Kaunas Lithuania, not Vilnius, are more than ten. We'll only consider a few.

Freedom Alley - built in the 19th century. It is considered to be the most famous pedestrian street in the city. Smoking is prohibited here, which locals think to be a perfect solution. This street connects the old and new part of Kaunas. It is here that history and modernity are intertwined with each other when old age-old buildings "neighbour" with modern buildings. Along the alley, there are trees planted, in the shade of which it is pleasant to relax on a hot summer day. And colourful flowerbeds with a variety of colours emit a scent that makes you dizzy. Walking along Freedom Alley, you can visit temples and churches, shops and boutiques, cafes and restaurants, theatres and museums. In general, visiting Kaunas will not take you long to look for sights.

Almost every tourist makes an approximate route before the trip, designed for a certain number of days of travel. When asking the question "what to see in Kaunas Lithuania?" don't forget to mention the most famous place in the city - Kaunas Castle. This structure is considered to be the oldest stone castle in all Lithuania. The first mention of it is mentioned in the "Chronicle of the Land of Prussia", published in 1361. It is the only fortress in the modern state territory with a double defensive wall lined with stones and bricks.

The entire castle has not been preserved - almost a third of the structure has survived. In the Round Tower, which used to be an observation tower, today there is an exhibition centre, where you can see modern paintings and sculptures of Lithuanian masters.

The mysterious Pazaislis Monastery is located on the shore of the Kaunas Sea (yes, there is one, which is considered to be the largest artificial reservoir in Lithuania). There is no more impressive and spectacular complex built in the Baroque style on the territory of North-Eastern Europe. The monastery's striking architecture, which has three centuries of history, is very organically combined with the peacefulness and tranquillity of the surrounding nature.

The monastery founder was Chancellor of the Grand Duchy of Lithuania, who was considered an expert and lover of architecture and art. That is why Italian craftsmen invited him to create a unique ensemble of hexagonal structures decorated with concave facades, stucco work and frescoes.

The Pazaislis Monastery has experienced several defeats and devastations: first from Napoleon's army, then from German soldiers during World War I. During the Soviet period, and it was used as a state archive, tourist base and even a hospital for the mentally ill.

In 1992, the monastery was restored and improved. Nowadays, every summer, the Pazaislis Music Festival is held here, which is considered the most massive cultural event in Lithuania. You can enjoy classical and opera music, as well as jazz at concerts known far outside the Baltic States.

One of the main reasons to travel to Kaunas Lithuania is the old city, which is more beautiful and colourful than Lithuania's capital. To feel the spirit of the ancient times and to plunge into the atmosphere of the past, it is not enough just to look at photographs, no matter how successful they may be, and read out the notes of experienced travellers. To see everything with your own eyes and immerse yourself in the centuries-old history, Kaunas, the old city, will reveal its secrets and legends.

The "Heart and Soul" of the Kaunas Old Town is the Town Hall Square, on which the Town Hall is erected. It is also called the White Swan of Kaunas. The Town Hall construction began in the 16th century, but it is difficult to determine the style of development, as it has undergone frequent reconstructions. What was not housed in the modern City Hall! Prison, warehouses, fire station, theatre, temple, king's residence, archive, educational institution and even wedding palace.

Not far from the Town Hall there is the largest temple in the city - the Cathedral of St. Peter and Paul. Be sure to look there - you will be surprised by the exceptional interior decoration and abundance of frescoes' extraordinary beauty. The temple is also famous for having a healing image of the Suffering Virgin Mary in it.

In the old town, you should just walk through the narrow streets and enjoy the architecture of 16th-century buildings, original monuments and unusually decorated showcases. Feel free to visit all the old churches and churches that you will meet. Each of them has a unique interior and special atmosphere.

The Devil Museum Kaunas, located in Kaunas, is the only one of its kind in the world and unique museum of devils, which is not just a collection of figures and figurines of all types of evil. The deep meaning of the exhibits is in understanding the power of earthly temptations. After all, all the pleasures we receive are somehow connected with the devil.

The owner of the museum's exposition was a famous Lithuanian artist named Zhmuijinavicius. This strange hobby began in 1906 when he was presented with the first wooden figure of the devil. After that, he could not stop and continued to add to the collection until it grew to 260 exhibits. In 1966 the artist handed over all the figures he had collected to the state, after which the Museum of Devils was opened in Kaunas. After the death of the collector, the exposition continued to grow. Today it includes more than 3 thousand items made of ceramics, leather and metal, brought from 23 countries. And these are not only figurines and figurines of the devil, but also mugs, ashtrays, tubes, candlesticks.

For every tourist who has visited Kaunas, the Devil museum Kaunas will leave a lasting impression. A visit to this strange and beautiful place will certainly make you think about the meaning of being and the deep meaning of many actions.

In the glorious city of Kaunas, sights are not limited to cathedrals, temples and museums. Visit the picturesque Zaljakalnis district, where you can enjoy a walk through Europe's largest oak grove in the Azuolinas Park on 84 hectares. Some trees are over 300 years old.

Once upon a time, the city was surrounded by an impenetrable oak forest. Still, after numerous felling, there is only a small part of it (according to some estimates the number of oaks is close to 770), ennobled and created for recreation of locals and visitors.

An exciting feature of the park (and of the city as a whole) is wooden sculptures. Figures of people, animals, fairytale characters or just benches for rest decorate the territory and contribute to local artisans.

A specific part of the park is named after the poet Adam Mickiewicz. When the poet lived in Kaunas, he loved to visit the valley of the small river Hyrstepis, which flows through the park. Today this beautiful place is called "Mickiewicz Valley".

It's the only zoo in the country. It is, therefore, obligatory to visit, especially if you have children in your tourist group.

It is located in Azuolinas Park, so you can visit and feed the animals first and then go and enjoy the picturesque natural scenery in the oak grove.

The zoo was founded in 1938 and had about 3 thousand different animals: hippos, kangaroos, bison, giraffes, reindeers, monkeys, lions. The pride of the zoo is the llamas. They can be seen at festive events of the city and some festivities. The zoo also has an aquarium, terrarium, museum, souvenir shops and Kaunas attractions.

It is worth a whole day to visit this unique open-air ethnographic museum. It is located 18 km from Kaunas in the beautiful town of Rumsiskes. The complex of ancient houses (some of which are over 200 years old), manors, farms, mills, chapels and even fragments of villages will plunge you into the historical atmosphere of Lithuanian life of the 18th-20th centuries. Many buildings were carefully brought here from the most remote parts of the country.

Here you can see and even take part in the work process of a potter, blacksmith or jeweller, ride a bike or order a cart trip along the picturesque paths and edges, try the national Lithuanian cuisine.

Homesteads and exhibits are only open to the public during the summer season. Otherwise, you can take a walk in the forest thickets or have a picnic on the Kaunas Seashore.

Nowhere else in Lithuania you will see such type of urban transport as funiculars. So if you're travelling around the capital of Lithuania, be sure to look for a way to get from Vilnius to Kaunas, so you won't miss out on a ride in the ancient atmospheric carriages, declared monuments of architecture.

Today there are two lines, one of which leads to Zaljakalnis hill and the other to Mount Aleksotas. They have been operating for 80 years, and when passengers board the coloured carriages, music sounds.

In the vicinity of the village of Arlavishkes on an area of 5 hectares is a plantation of juniper, which is a monument of nature. Individual plants reach a height of almost 13 meters. There are also century-old "old-timers" among them. There is a trail along the valley, which is considered the most beautiful tourist trail in the country.

Cloudberry is a particular plant. Alloying aromatic oil, it saturates the air with healing microelements. Therefore, when walking here, take your time - breathe in the full chest this extraordinary fragrance and enjoy the natural scenery. Beautiful views from this trail are provided for you. The panorama of Nemunas (Neman River), the Dabinta Islands, the Rokalnis precipice will give you enchanting moments of admiration. The rare species of butterflies and singing birds amid greenery will take you as if to fairytale land.

Of course, that's not all the reasons why you should come here. Familiarize yourself with the recommendations of this article and then the answers to your questions when you visit Kaunas - what to see in Kaunas Lithuania and where to go - will be visible. The Lithuanian capital of Culture has four theatres, 40 museums and art galleries, many temples and cathedrals, monuments and sculptures. It will take more than one day to see all the sights. But believe me, after a trip here you will always have the "aftertaste" of something beautiful and real, which will draw you back for a long time.