12 reasons why you should travel to Latvia right now 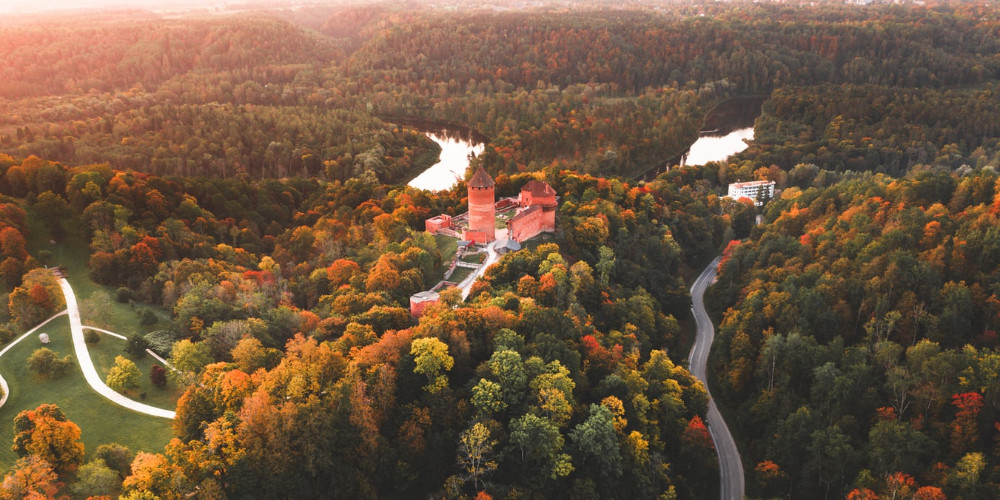 . The European part of the former USSR, which emerged from it during Perestroika. It is still one of the most visited republics for Russian people, as evidenced by the many Russian events. Periodically, the spirit of the Soviet Union is felt on the streets of Latvia, mixed with European life and the long history of the Latvian people. About this spirit, particularly about the sights of Latvia, we will talk a little below.

Lithuania and Latvia. These countries are very similar to each other, and some people even consider them as one. Of course, this is not true, but there are similarities. All of them are based on the fact that both countries occupy approximately the same European area and are located in the Baltic States. The first thing that distinguishes the Baltic countries is, of course, the climate. There are no mountains, but a lot of forests and lakes. It is all reflected in the local morale and mentality. People are closed because they have been accustomed for many centuries to live in their pleasure and independently run their household. Nevertheless, Lithuania and Latvia are quite creative countries. Another important detail that concerns all the Baltic countries without exception is the cultural heritage. Since at one time these places were full of secluded feudal lands, through which sea and not only trade routes passed, tourist attractions like centuries-old castles are found everywhere.

We have already found out that Latvia is a country of the former USSR. Accordingly, the population of Latvia includes many Russian people who once inhabited this beautiful country. Russian population in Latvia approximately 34% of the total, and most of the local Latvian people speak Russian fluently, although Latvian is considered the official language. And even among the Latvia tourist attractions, you can see signs, routes and instructions in Russian everywhere as a trace of the Soviet Union.

3. Where is Latvia on the map?

One of the main reasons why you should travel to Latvia is so attracted to Russia for hosting numerous events is, of course, its geographical location. The low-lying Baltic location allows Latvia to have moderate warm weather and transition from a maritime to a continental climate. The thermometer scale rarely drops below 5 degrees below zero, and in summer, it is quite a normal temperature – from 16 to 18 above zero. Latvia on the map is located slightly to the west of Russia in the northeast of Europe. A good neighbourhood, a good location – everything you need to travel to Latvia right now.

If you look at this inland sea, one of the first on the list should be Latvia. Here are some of the most popular places of the Baltic Sea, not only because of the attractions described in this article but also because of the picturesque beaches with their green oases. The main places for sea holidays in Latvia: * Jurmala: This famous city in Russia is suitable for a beach holiday, first of all, at the end of the season. It is due to the city's location near deep-water areas, where the water warms up for a long time.

* Liepaja: A warmer and more undulating place than the previous version. Accordingly, you should come here to rest earlier. Especially here, it is worth going if you love the waves and everything connected with it. * Ventspils: A rainy city, in which it is unlikely that you will be able to swim properly. But, on the other hand, if the picturesque view is more important to you-welcome! * Asari and Melluzi: Therefore, the minimum depth at the coast and the longest of all the described places retains heat.

5. The historical heritage of Latvia

Like many European countries, Latvia owes its location. It developed steadily during the Enlightenment, which gave it a versatile flavour of our time. The ancestors of modern Latvians are ancient Baltic tribes, from which the Curonians, Latgalians, Zemgalians and villages grew up during the development of society. At the turn of the XI and XII centuries, Latvia's location becomes very profitable for trade, and Latvia begins to develop rapidly. This is how the Latvian principalities appeared, whose historical monuments still stand on the territory of Latvia. By the beginning of the Second World War, Latvia was forcibly incorporated into the Soviet Union and remained there until Perestroika's time. Therefore, we can say that in Latvia, its history and attractions, three main epochs echo: feudal, Soviet and modern European.

6. The image of Latvia for tourists

The main thing that attracts the average tourist to Latvia today is its attractions. This can be safely attributed to both natural beauty and historical monuments of feudal times. Here you can find attractions for every taste: sunny Jurmala is famous for its beaches, Eglava-museums and churches, and Daugavpils' city can be immediately recorded in one large architectural monument. There are many unique buildings of the XIX century, and in the seaport of Liepaja, there is an impressive drawbridge designed by Gustave Eiffel.

The green world of Latvia will be best seen, of course, in the largest and oldest national park in the country – Gauja. It is called so, which is not surprising, in honor of the Gauja River, in the valley of which the reserve is located. As soon as you come to this beautiful park, the majestic cliffs of Erglu immediately catch your eye. Above them, especially for people, a viewing platform was built, from which you can see the calm river with all its beautiful curves. The rest of the park's beauty is numerous cliffs and cliffs, which you can enjoy by hiking on bicycles or rafting on the river. But the most important reason why people come to this park is, of course, the caves.

The sandstone, which is visible in all its glory from the rocks mentioned above, has been standing in these places for more than 350 million years, and every year Latvian nature only hones its appearance to perfection. The voids that appeared in the sandstone after the ice age have a fairly large area and are the reserve's most visited place. These caves are interesting natural Latvia tourist attractions that go below sea level and cultural monuments: there are inscriptions from time immemorial around the XVII century on the walls.

We're not out of the park yet. Because on its territory there is something else interesting, in addition to natural species. It is full of ancient manors and castles, whose inhabitants in the distant past left their writings in the caves mentioned above. The most interesting sights of Latvia among Gauja Park buildings are the ancient settlements of Sigulda, Cesis and Valmiera. To some extent, these Latvian cities are even inhabited, but most of their area is occupied by ruins. The most popular locations in the ruins of Gauja Park are Turaida Stone Castle and Ungurmuizh manor. The next stop is the Araish Lake Park-Museum. Its main interest lies in the fact that there is a full-scale reconstruction of this place's life in the X century. The old quarters of these cities contain a lot of interesting things. And these are only the most visited ancient cities in Latvia. There are a lot more of them if you search for them.

9. The capital of Latvia, Riga

Tourists travel to Latvia, most often stay in this city. And this is not only because Riga is the capital of Latvia. What has described just above-a mixture of epochs, felt right during the hikes around the city, is very well felt in this place. The story here comes to life and appears before the eyes in all its glory. Riga was chosen as one of the cultural capitals of Europe for a reason. Starting in 1201, this city was rebuilt incrementally, leaving behind the symbols of past eras. Old castles, narrow streets-all this exists in the neighbourhood of a modern business city. This city is worth more than a day of sightseeing. And even places with attractions are conditionally divided:

* Old Riga: As it is not difficult to guess, this place used to be the whole of Riga. During the city's rich history, people of different nationalities lived here and built their own houses in their national style. There are especially many buildings that are related to German architecture. The sights of Latvia are mostly concentrated here. Be sure to visit the Riga Castle and the Dome Cathedral. * Historical center: The appearance of Riga, which appeared a little later. At the time when the city of Riga was growing, the poor lived here around the stone city walls, which were built for themselves by the nobility from Old Riga. The walls were destroyed, and in place of them and class inequality, famous architects from all over the world began to come here, who built their buildings, again, in their own style, many of which later became the property of art. And towering above all this is the Freedom Monument – the highest and most important attraction of the historical center of Riga, the capital of Latvia.

In Latvia, a lot of mass events are held, where people from Russia like to visit. The climate is favorable, and besides, the weather in Latvia is more favourable, and the Russian language is used everywhere. Key events to go to in Latvia: * Organ Music Festival in Liepaja: Thanks to the world's largest mechanical organ, located in the Cathedral of the Holy Trinity. One of the main annual events in Latvia.

* International Festival of Ice Events in Jelgava: Over the years of its existence, this festival has grown incredibly in its level and every year attracts more and more famous sculptors from around the world. * "New Wave" in Jurmala: The competition of young performers, well-known since Soviet times, is no longer held in Jurmala, but it has long been associated with this city. Because of the way this resort has risen and grown because of the competition, the competition is worthy of mention.

This is also one of the main Latvia tourist attractions of the Baltic country. Simple, hearty cuisine with soups for every taste. Special mention should be made of beer soup with cumin and egg yolks. Dairy products, cabbage and sorrel, are also popular here. In general, Latvian cuisine is very different from the usual dishes throughout Western Europe. Most likely, this is a consequence of the power of the Soviets on the territory of the country, but the fact remains. Latvian cuisine is different from European cuisine, and its simplicity and variety will always please the Russian person.

Finally – the information without which you are unlikely to be able to enter Latvia. You will need a visa-a Schengen or Latvian visa. Medical insurance and other documents that are always necessary for visiting European countries are mandatory. Proper registration of documents is a very important point when planning a trip to Latvia. So, be patient, make a Latvian visa or Schengen and come to the country.

Apply for any visa in two clicks!
Topics
Countries
Do you want to get a Latvia visa easily?
Get your visa now 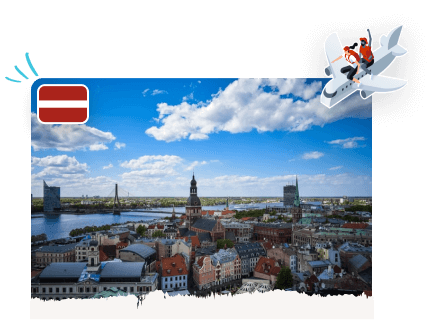