16 reasons why you should travel to Uruguay right now 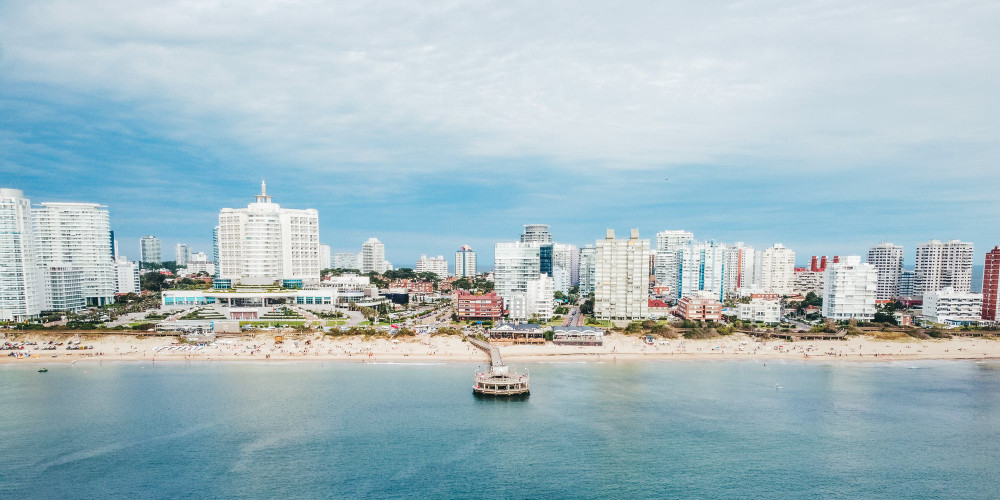 ? It is a Latin American country that is officially called the Oriental Republic of Uruguay. It is located between two popular countries Brazil and Argentina. That is why most travelers underestimate its touristic potential and even do not know how to travel to Uruguay. Nevertheless, it is one of the best and beautiful countries in South America. How to travel to Uruguay? There are several ways to enter the country. Carrasco International Airport is open for flights from many parts of the world. Some tourists prefer to fly to Buenos Aires and then rent a car to drive to Uruguay. If you are in one of the neighboring countries, the train might be an amusing option for you. Also, the Montevideo seaport is suitable to accept visitors coming through the Atlantic Ocean. Is it safe to travel to Uruguay? Uruguay is known as the most peaceful and calm country in the whole of Latin America. Imagine a state, the president of which lives in a small house without guards and donates a considerable part of his salary for charity. I think that is enough reason to stop questions like, is it safe to travel to Uruguay? Uruguay sounds fun to travel to, and in reality, it is entertaining, too. Summer months are the best time to travel to Uruguay. And do not forget, the summer in Uruguay lasts from November to February. In this article, 16 reasons were listed to show why you should travel there right now, and the best places to visit in Uruguay are recommended.

The capital of Uruguay

, located on the banks of the Rio de la Plata, is one of the most privileged cities in all of South America, and it is one of the first places to visit in Uruguay. It has the right level of tranquillity, security, and touristic services, in addition to being a city full of parks, trees, and green areas. On the hottest days, which is the best time to travel to Uruguay, people take the opportunity to bathe on the beaches of the Rio de la Plata. You can walk through the historic center, go shopping, or spend an afternoon on the boulevard of the city. Uruguay sounds fun to travel to; football lovers can go to the legendary Estadio Centenario, where the first World Cup was held in 1930. Now, within its facilities, there is the Football Museum.

A part of the Uruguayan cuisine is shared with Argentina and southern Brazil. For this reason, many of its dishes are considered from Rio de la Plata. But despite sharing the gastronomy with its neighbors, in Uruguay, you will taste their own and local dishes such as Asado, Chivito, Dulce de Leche, and Alfajores. In addition to excellent wines recognized worldwide, you can try drinks such as Grappamiel or Medio y Medio.

? The country is located in South America. That is why most of the historical sites of the country date back to colonial times. Some fortresses are kept in perfect condition, which then was converted into museums. Among the most outstanding fortresses is the Fort of San Miguel. Also, there is the city called Colonia del Sacramento, which, to this day, maintains the architecture of the colonial era, a mixture of Portuguese and Spanish architecture. The historic center of Colonia del Sacramento was declared a "Cultural Heritage of Humanity" by UNESCO in 1995.

Those who are looking for a beach but want to escape from all the disturbance and noise of the people can opt for resorts as unique as Cabo Polonio. One of the best places to visit in Uruguay has gigantic dunes like a desert, which can only be accessed through a four by four car. There is a spa, with well water, shiny sun, and without electricity. It is an ideal area to disconnect from the rest of the world.

Mate is the national drink of Uruguay, unofficially, of course. It is a high-caffeine drink made from leaves of the yerba mate plant. People carry thermoses of hot water as well as a mate and a bombilla (metal straw to filter the drink) to carry out this social tea ritual. Some people joke that the yerba mate is the only thing in Uruguay which can make you question, "is it safe to travel to Uruguay?".

In the north of the country, there are hotel complexes and water parks with hot springs, of which water temperatures range between 38 to 45 degrees. These hot springs are well known for their healing and medicine properties due to the high concentration of minerals such as calcium, magnesium, and potassium. To experience these springs, the winter is considered the best time to travel to Uruguay.

With its villages and farms, Uruguay sounds fun to travel to. It is where you can travel the plains on horseback, eat barbecue, attend horseback riding or learn about the life and culture of the countryman known as a gaucho.

Between the colonial architecture of the cities along with the Rio de la Plata River, the excellent theatre in Montevideo, or the tango, or the influence of Brazilian folklore, Uruguayan culture is very varied. Now, the country has also given way to street art, which you can admire in almost any corner, especially in the capital and in de San Gregorio de Polanco, which is an actual open-air visual art museum.

While South America is known for the warmth and welcoming feeling of all its inhabitants, this can be seen perhaps even better in Uruguay. Everywhere you will see a smile, hands outstretched to help, and some sweet nicknames. In the capital Montevideo, a city of human dimensions, life seems to flow like a calm river, and it is easy to quickly feel integrated into all of it like a big family.

Despite its size, Uruguay has more than 650 kilometers of beaches. Some on the Atlantic Ocean and others on the La Plata River, the widest in the world. This river has a peculiarity that is hard to find in other parts of the planet. The famous resort of Punta del Este is located there. Punta del Diablo is an old fishing village with beautiful beaches adorned by rock formations, which have been sculpted by the waves over the years. Very close to this site is the Santa Teresa National Park, where in addition to beaches, you will see a botanical garden, greenhouse, and a rose garden with spectacular beauty. One of the beautiful places to visit in Uruguay is Piriapolis, with beaches on the Rio de la Plata, adorned by its hills and the avenue that runs along its coasts.

, known as "Pepe," was a very famous president because he lived in the countryside for five years until the end of his term in March 2015. Today he is considered one of the most prominent heads of state, an example of honesty, and a true inspiration for many.

Uruguay is one of the most football-loving countries in America. The Estadio Centenario Stadium was chosen by FIFA to host the first World Cup in 1930. Uruguay, by the border with Brazil and Argentina, also performs its carnival every year in February. Unlike its neighbors, this one lasts for 40 days. The longest in the world!

For adrenaline lovers, in Uruguay, you can practice various extreme sports such as parachuting in Canelones, walking over a Tibetan bridge of more than 100 meters, canopying in Pan de Azucar, and many more activities. Regarding water sports, which can be practiced on different beaches, surfing would be the most predominant of all.

Located just 15 minutes from Punta del Este, Punta Ballena is a place that travelers often overlook. This destination, like Punta del Este, is a peninsula where there is an outdoor work of art called Casa Pueblo. This building was built by the Uruguayan artist Carlos Paez Vilaro. A house in the best Greek style and with a dazzling panoramic view of the bay of Portezuelo. In Casa Pueblo, you will find Paez Vilaro's atelier, where you can buy some of his works. Also, from the viewpoints, you can see one of the best sunsets in the whole country.

Like some states, in 2013, Uruguay approved the legalization of the production, sale, and use of marijuana. It attracts more tourists to the country.

? It is between Brazil or Argentina. To start the trip, you can enter the country from both neighbors. How to travel to Uruguay? Ten hours by bus from Montevideo, you can reach the city of Porto Alegre, Brazil. In the case of Argentina, you can go from Montevideo or also from Colonia del Sacramento to Buenos Aires by ferry. Or if you are short on time, you can even cross by plane, which would take about 30 minutes.

Topics
Apply for any visa in two clicks!
Countries
Do you want to get an Uruguay visa easily?
Get your visa now 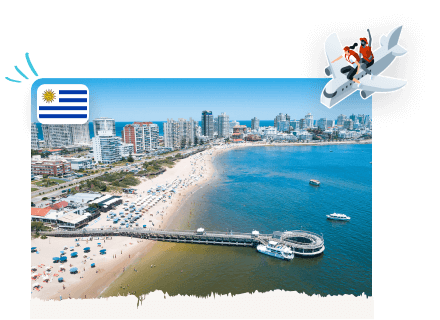