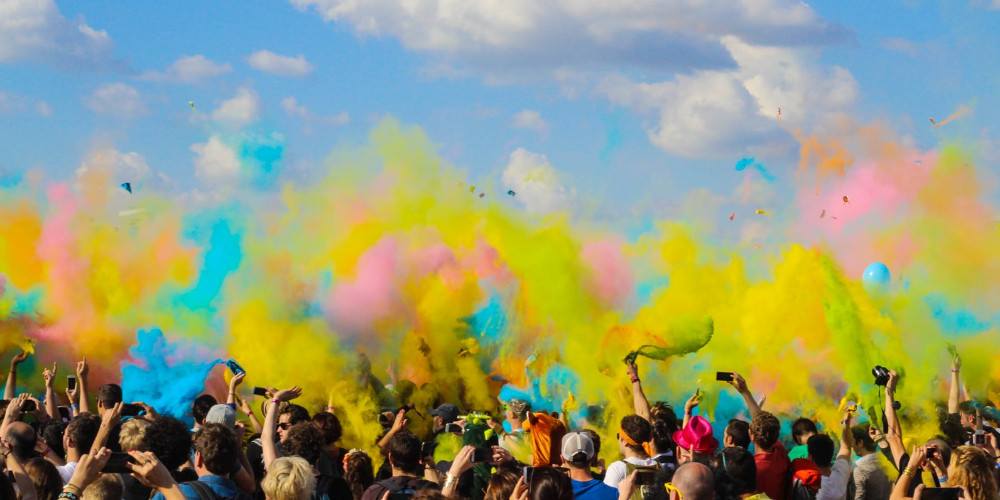 The world's most colorful holidays

Day of the Dead

If you want to get acquainted with the culture and history of a country, participate in its celebrations. All of us love the holidays and look forward to them. During the holidays all the family, friends, acquaintances and relatives come together to celebrate the unforgettable day. But what about a holiday in another land among people you do not know?

What is Burning Man Festival? The festival has been held annually since 1986 in the Black Rock Desert in the state of Nevada, USA. The festival begins at 00:01 on the last Monday of August and lasts eight days. More than 70,000 people take part in the Burning Man Festival annually with incredible ideas, colorful costumes, and their self-made transport. In fact, this is not a festival but an environment that will change your mind and move you away from reality. The primary purpose is to make people more creative, kind, and open. You can't buy anything except coffee and ice at the festival; you only can exchange things with others. Hundreds of "mutant" vehicles and people in unusual clothing are moving in harmony with the music. Landscape, music, lighting is continually changing, so you can lose yourself and your belongings. This is natural for one of the most popular festivals in the world - The Burning Man Festival.

Those who come here to express themselves build different art objects in the middle of the desert have fun and learn. At the end of the festival, the participants destroy everything - burn all traces. And most importantly, on the last day, a human sculpture made of wood, the symbol of the festival, is being burned.

Knowing as one of the most expensive festivals, tickets cost an average of $ 500, but this does not prevent the flow of people.

Day of the Dead

The Day of the Dead, one of the most strange holidays in Mexico, is held on 1st and 2nd November. The historical roots of the holiday go to the Aztecs.

Only the Mexicans managed to make the day of the dead a celebration. Pre-holiday preparations of these strange holidays do not end with decorating the house but also with preparing altars for the deads. Most of the shrines are occupied with pictures of deceased family members. Moreover, they put some of the dishes that the deceased loved, sugar skulls, and decorations on the altar. Everywhere is decorated with candles and wreaths.

The actual death for Mexicans is when they are forgotten. Traditionally, the dead usually return to their homes in those days. Nothing terrible is happening these days, but Mexicans must cheer their dead.

If you are in Mexico on the Day of the Dead, you should go to Zocalo Central Square. During holidays, it looks like a decorated cemetery, and people with skeletal make-up and costumes are everywhere.

On the other side of Mexico - in San Andres Mixquica, you can feel the mystique of Day of the Dead. It is remembered for its peculiar nights. Shows with candles at night make the holiday even more colorful.

When is Holi festival? India's colorful spring festival is in February-March. The myths about the Holi holiday go back to ancient times. It is associated with the name of the demon Holika. That is why every year, people burn the statue of the cruel Holika at the festival.

Pre-holiday buildings are painted in bright colors, everywhere is decorated with flowers, various beverages are made, water spraying machines are installed, and most importantly, residents buy colorful powders. It is interesting that, regardless of age, everyone actively participates in the holiday.

If you're in India, don't be afraid to get your clothes stained and mix with people who are coloring each other in this one of the most popular festivals in the world. Undoubtedly, you will have colorful memories from India.

At the festival in February, 25 teams from around the world prepare more than 100 snow statues. You can also enjoy an extraordinary exhibition.

One of the most exciting holidays in the world has always been chosen with challenging choreography, music, and unique costumes. Rio Carnival, which has become the national symbol of Brazil, was arisen during the slavery period.

The 14 best Samba schools in Rio de Janeiro get ready for the carnival for a year. They set musical performances, make bright, unique costumes for dancers, and create colorful decorations. And the day of the Rio festival, all of this is demonstrated.

There are street dance festivals, a parade of street musicians, night concerts, and various dance parties for the tourists. Tourists attending the carnival say that this holiday has become their most beautiful and unforgettable experience. Go to Rio de Janeiro and be one of those who enjoyed those memorable moments while being in one of the biggest festivals in the world.

The colorful, different holidays of the world do not end here, and almost every nation has its unique traditions and exotic holidays. Apart from our list, there are also positive, different holidays such as oranges, tomato fights, Electric Daisy Carnival, Diwali, etc. Do not stop your journey; there are still hundreds of places you can see and thousands of senses that you can live!

Top famous festivals of the year! 12 amazing festivals for each month! The 20 strangest holidays in the world The colorful world of passports: What do passport colors mean?

Arzu was born in 2001 in Saint Petersburg, Russia. She lives in Azerbaijan since 2006. She loves travelling a lot and has been to a few cities of Russia and Azerbaijan. Her biggest dream since childhood is to see the beauties of Paris on her own. While waiting impatiently to realize this dream, Arzu has already achieved a few other goals of her. Her realized dreams include studying at the Journalism faculty. Arzu, who has a deep knowledge of this field, is fond of writing about her experiences.