10 things I wish I knew before going to Vietnam 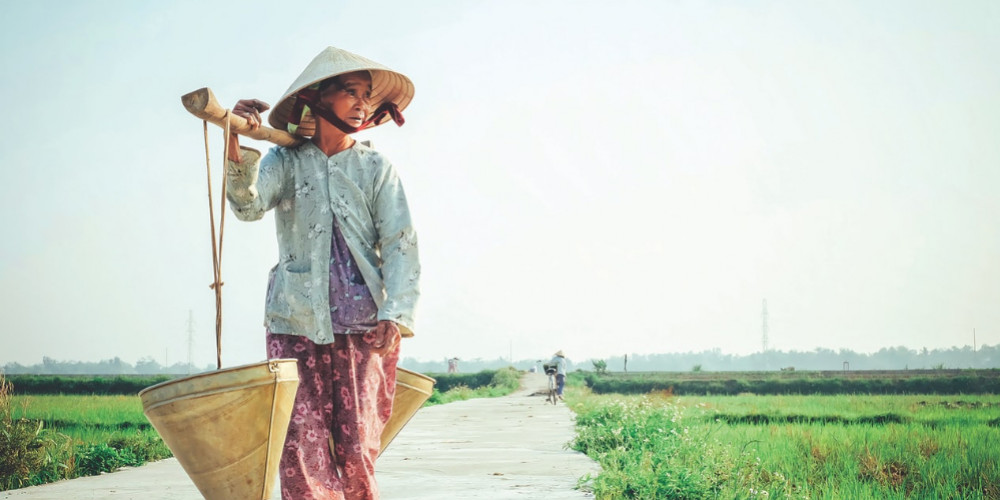 Since the beginning of time, travelling and learning new things have attracted human beings. In the 21st century, travelling is more accessible than ever was. Asia is one of the most attractive destinations for people, and one of these interesting Asian countries is Vietnam. In recent years millions of people make plans about visiting Vietnam, so we would like to give priceless information about Vietnam to travel lovers. In this blog, you will learn that what is the best time to travel to Vietnam, where is Vietnam, where to travel in Vietnam, is it safe to travel to Vietnam, and more.

1. Basics about Vietnamese people and Vietnam

? Vietnam (the full name is the Socialist Republic of Vietnam) is a Southeast Asian country on the Indochinese Peninsula. China, Laos, Cambodia, Thailand, the Philippines, Indonesia, and Malaysia are neighbouring countries. The total population is 96.2 million as of the 2019 data (15th most populated country in the world), and the whole area is 331,212 square kilometres. 86.32% of the population is irreligious and differ from other Asian countries; only 4.79% of the people believe in Buddhism. 85.32% of the populace identifies as ethnically Vietnamese, and there are more than 50 different minorities. The capital of Vietnam is Hanoi, and the most populated town is Ho Chi Minh (former Saigon).

2. Is English enough to communicate in Vietnam?

Unfortunately, speaking only English can be problematic for you because a large part of the population does not speak English. You can use it in many touristic places, but if you want to communicate with local people, you may fail. Besides, the young generation has skills in English, so if you need help (asking directions, for example), ask them. Another most spoken language after English is French. Especially the old generation has good skills in French. Can I learn the local Vietnam language? This question is difficult to answer. Most people think that this language is simple to learn, but pronunciation needs time.

Generally speaking, Vietnamese cuisine is rich, but it is not complicated to cook Vietnamese meals. Some of the meals which we can mention are Goi Cuon, Bun bo Hue, Banh Khot, Ga tan, Nom hoa chuoi, Bun bo Nam bo, Hoa qua dam, Ca Tim Kho to, and more. There are a lot of fried foods in Vietnam, so be ready to gain weight after your travel to Vietnam. If you don't like fried foods, you can try Goi Cuon, which is healthy and light rolls. Generally, this cuisine is very healthy because of the lack of utilization of oil and much usage of fresh ingredients. Fish sauce, soy sauce, fresh herbs, fruits, and vegetables are widely used in Vietnamese cuisine. Besides, beef, pork, chicken, fish, and various kinds of seafood are used in most dishes. When it comes to cakes, they wrapped the cakes in banana or coconut leaves. It is exciting to note that well-known fast-food chains failed in Vietnam. The main reason for the failure is the local restaurants. Not only fast-food restaurants but also the famous coffee chain Starbucks failed in the country. There is a much enormous demand for traditional Vietnamese coffee.

4. All you need to know about Vietnam currency

If you want to travel to Vietnam, you should know which money to use in the country. Like many other countries, they have a currency called Vietnam Dong (1 USD is 23176 Dong). The American dollar is widely acceptable in the whole country. You can pay money to hotels, hostels or you can do shopping in markets, and more. Usage of the other currencies such as EURO, AUD, British pounds, Canadian dollars can be problematic because most of the owners don't accept them. Also, the exchange rates of those are so low. So, if you use other currencies, it would be better to exchange them into USD before travel. Furthermore, you can use credit and debit cards, or you can get cash from an ATM.

5. Where to travel in Vietnam?

There are countless places to visit in Vietnam. Lush nature, fresh air, forests, a wide range of animals, architectural beauties, and more will make your Vietnam travel unforgettable. Some of the places which you should visit are Sapa, Halong Bay, Hue, Phong Nha-Ke Bang National Park, My Son, Hoi An, Hanoi, Nha Trang, Cu Chi Tunnels, etc. In this blog, we can't talk about all of them, but we will give detailed information about some of them. The first one is Sapa, which is the most beautiful countryside area in the whole country. This place is surrounded by jagged peaks of the Hoang Lien Mountains ( formerly Tonkinese Alps). Here during your hiking, you will meet some ethnic minorities (Hmong, Giay, and Red Dzao people), beautiful nature, and more. The mesmerizing view of the valleys and mountains will charm you. The best time to travel to Vietnam Sapa is March and May or from mid-September to early December. Another hypnotizing place is Phong Nha-Ke Bang National Park. Phong Nha-Ke Bang National Park is an exciting karst mountain form honeycombed with enormous caves, and this area is on the World Heritage List. The most famous stop inside the park is the Paradise Cave, which prolongs 31 kilometres below ground. The best time to travel to Vietnam Phong Nha-Ke Bang National Park is between June and August. Where to travel in Vietnam, Hanoi? The capital of Vietnam is rich enough with touristic destinations, for example, Hoan Kiem Lake, Temple Of Literature, Old Quarter, Thang Long Castle, Water Puppet Theatre, Ho Chi Minh Mausoleum, The Perfume Pagoda. Especially Temple Of Literature and Ho Chi Minh Mausoleum will fascinate you with architectural style.

Since June 2010, it is possible to fly to Vietnam with Vietnam Airlines. Vietnam Airlines have 21 internal flights and 28 external flights. A large part of yearly travellers is indeed from Asian countries such as China, Korea, and Japan (almost 12 million people). Russia, Australia, and the USA are only 3 none-Asian countries in the top 10. Further, September or January seems the best time for flights since you can find many affordable tickets. Oman Air, Bangkok Airways, Scoot, Thai VietJet Air, Nordwind Airlines, Thai Airways, Thai AirAsia, and Nok Air are other airlines that have direct flights to Vietnam. Is it safe to travel to Vietnam with Vietnam Airlines? On 15 October 2018, Vietnam Airlines published that AirlineRatings.com (the world's leading airline safety rating agency) awarded Vietnam a ranking rating of seven stars.

7. Where to stay in Vietnam?

One of the most advantageous sides of Vietnam is hotel and hostel prices. There are accommodation possibilities for all economic levels. It ultimately depends on your finance, vacation plan, and priorities. If you are looking for a cheap place to stay, here are some examples for you: C Central Hotel, Silverland Jolie Hotel & Spa, Paradise Boutique Hotel, La Beaute De Hanoi Hotel, Golden Sun Suites Hotel, Splendid Star Grand Hotel, Sanouva Saigon Hotel, Tan Hoang Long Hotel (price range is 15-50 USD). Is it safe to travel to Vietnam and stay in these hotels? Yes, most of these hotels are 3-star and higher. Besides, there are plenty of luxury hotels, for instance, Anantara Mui Ne, Sofitel Legend Metropole Hanoi, Avani Quy Nhon Resort & Spa, Banyan Tree Lang Co, The Reverie Saigon, Six Senses Con Dao, Four Seasons Resort The Nam Hai. The price range is remarkably broad, typically begins at 75 USD. Besides, District 1 is a lovely address for travellers since it is near to tourist areas.

8. Is it safe to travel to Vietnam?

Vietnam has one of the lower crime rates against men and women in the world, but still, you should think about your safety. Attacks against women tourists are lower, but it doesn't mean that there is not any danger. Snatchers prefer to attack women because of jewellery. Besides, as we know, there is a COVID-19 pandemic everywhere and in Vietnam, too. Fortunately, there is a dramatic reduction in the number of COVID-19 cases. On 13 September, there were just 3 cases. From the beginning of the pandemic, there were only 1063 cases and 35 losses. The highest deaths and incidents were in Da Nang (31 deaths and 394 infected people).

Unhappily, there were many sad moments in the history of the country, and the Vietnam War (Second Indochina War) is one of the most well known worldwide. It was between 1955-1975. For local people, this war is so crucial, and among people, this is the Resistance War Against America. The Vietnam War looks like the Korean War, but here the country is not divided into two parts. Although in the beginning, it was. Many other countries took part in this war, for instance, China, Soviet Union, North Korea, United States, South Korea, Thailand, Laos, and more. 1,353,000 is the number that shows how many people died during the war. More than 600,000 civilians died during the conflict.

10. How do you get around in Vietnam?

The last fact which we want to mention before your travel to Vietnam is transport. There are many options. You can use a train, metro, bus/van, plane, ferry, taxi, private vehicle/car, or motorbike. Public transport is cheap in the country and depending on the transport type, you will pay something between 0.13-1 USD. Rental car prices change between 80-135 USD. Apply for a Vietnam visa now and make your dream a reality!

Topics
Apply for any visa in two clicks!
Countries
Do you want to get a Vietnam visa easily?
Get your visa now 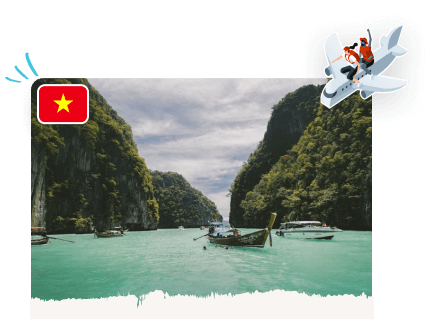