15 top places to visit in Cuba 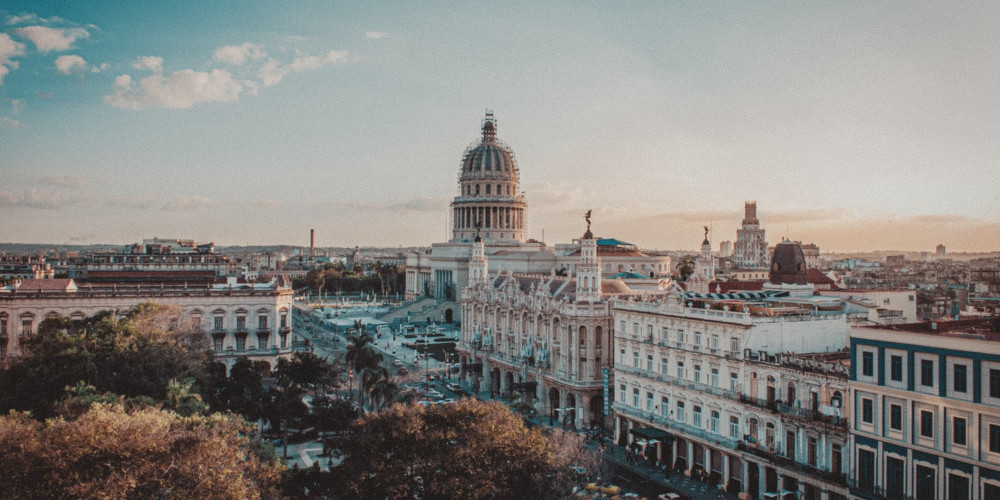 is one of the paradisiacal places of the beach season, without exaggeration. The beaches of the Caribbean coast will delight tourists with clear, turquoise sea water and snow-white sand. People travel to Cuba not only for a beach holiday but also for the flavor of their culture, with the history of Cuba from its origins, when Indian tribes inhabited it to the period of modernization with parks and boulevards. Cuba is a country that arouses constant interest as one of the last strongholds of communism on our planet. In Cuba, there are officially two types of currency: PESO and CUC. The peso is used in settlements between residents, and the CUC is issued specifically for tourists and is accepted for payment in all tourist places. Cookies are marked "pesos convertibles". In the past, Cuba was a Spain colony, so there are many buildings built about four hundred years ago; they are the main Cuba tourist attractions. Every tourist wondering what to see in Cuba?.  Now you will read 15 top places to visit in Cuba.

1. Museum of the Revolution

The Museum of the Revolution is considered a must-see Cuba attraction and opens the top of the best places to visit in Cuba. The popular Historical Museum of Cuba is located in the capital of Cuba - Havana, in the former presidential building. This building, which houses the museum, is an architectural and historical monument. There is still furniture there, the same original furniture of the fifteenth century used before the fall of the Batista regime, personal belongings, and photographs of Fidel Castro and other famous revolutionaries. If you decide to go out on the balcony, in that case, you will plunge into history with your head because from this balcony, Fidel Castro delivered his famous speech about the independence and freedom of Cuba. However, we should note that the museum's expositions cover the revolutionary period and the island's history since the fifteenth century. In Cuba, this museum is considered one of the most important Cuba museums on the island, and there are more than three hundred of them.

This two-storey museum will touch the soul not only of fans of the works of one of the world's famous writer but also regular tourists. In this estate, everything remains the same as the organizers of this museum tried to leave. Everything is intact, as it was during Hemingway's life. Here are preserved photos of the writer, a hunting rifle. Especially interesting are the bookshelves that reach the ceiling with thousands of books written in more than thirty-three languages of the world, and it was in this estate that he wrote his famous novel "The Old Man and the Sea", which was awarded the Nobel Prize.

This historical piece of history of Cuba is striking in its uniqueness because this part of the city is completely considered a landmark. It was built literally 20 years after the discovery by Columbus. The ancient palaces were destroyed along with the cathedral until the entire old city until Unesco declared this ensemble a World Heritage Site. Despite the poverty, there has been the extensive restoration of the courtyards and buildings, so a visit to this part of Havana, the capital of Cuba is mandatory. Walking through the historic streets, past buildings in the Baroque and neoclassical styles, you will plunge into the life of Cuban people with a two-hundred-year history. The longest embankment in the world, the Malekon, shows off all that Havana is so highly valued for. Classic tourist routes usually go from one famous square to another. Still, it is worth taking a step away from the route, and you will plunge into the best places of this city, namely the real world of Cuban people, see the untouched neighborhoods and their houses, and colorful locals.

This city is considered the second most important and largest city in Cuba. Don't miss the music clubs and colorful carnivals for which this city is quite well known. Santiago de Cuba is considered the cradle of the main trends of Cuban music. Bolero, conga, and santiaguera were born here. This truly fascinating and unique city is the most famous birthplace, without exaggeration, rum in the world. After many years of numerous and detailed experiments, Don Facundo Bacardi Maso created a unique light and soft rum, and in 1862 founded the company "Bacardi y Compania". The residents of this city are proud of its rebellious past because it played an important role in the revolutionary struggle. In this city, the victory of the revolution was first announced. You can list all the charms of this city endlessly, or you can see it with your own eyes and admire it.

This island is located to the north of Cuba. It is known for its beautiful Cuban beaches with white sand and clear blue water, and pink flamingos will help you take Instagrammable photos while you will enjoy the environment of these truly unique birds and even be able to feed on your hands. Most likely, you have not heard about this island, as about other Cuba tourist attractions of the Caribbean coast. Still, you are definitely familiar with the greatest works of the world-famous author, Ernest Hemingway, because here he was inspired to write such works as "Islands in the Ocean" and "The Old Man and the Sea".

It is probably the most famous of the best places to visit in Cuba because here are the best and most famous Cuban beaches that will surprise you with snow-white sand and turquoise sea, as in the very bounty advertisement. Here reigns eternal summer and endless holidays, accompanied by incendiary Latin American music and the color of the locals. This place especially attracts lovers and just romantic tourists and diving enthusiasts. Under the clear waters of the Caribbean Sea, where a vast ridge of reefs stretches, divers will be able to admire corals of the most interesting shapes.

This National Park has been listed as a UNESCO World Heritage Site since 1999. The Vinales Valley is located in the mountains north of Pinar del Rio. The area of this park will impress you with its pristine beauty and Spanish colonisers' culture. When you travel to this park, you can see residents' lives and their agricultural activities because they grow fruits, vegetables, world-famous tobacco, and bicycle and horse tourism. The national park's main Cuba attraction is the hills with a flat top and steep slopes (Mogotes). The limestone hills resemble stone islands that rise proudly above the green vegetation and the locals' homes. They are located throughout the park, so they attract rock climbers. In these mountains, there are also caves with rock paintings, and the most famous is the cave of the Indian.

It is a fairly large province of Cuba, but civilization has not yet completely absorbed this provincial city, so you will not have a question about what to see in Cuba. You will be able to fully immerse yourself in the atmosphere of the locals and the history of the country. In addition to this province's historical infrastructure, you can also plunge into the life of church denominations and feel like a Cuban, albeit for a while.

This is a wonderful place for those who want to relax from the noise and enjoy the silence of the blue waters of the Caribbean Sea and untouched by tropical vegetation. This attracts travellers from all over the world looking for privacy with their loved ones and with Cuba nature. It is also one of the most famous and best diving places because, on Cayo Levis's island, unique black corals grow under the water, listed in the Red Book. Diving enthusiasts should visit this place.

It is a small exotic republic located on an archipelago between the Caribbean Sea and the Atlantic Ocean. You don't need to talk about a city, but just see, as it is an open-air museum, with its colonial Cuban architecture, and the waterfalls and cascades fascinate you. This city also attracts tourists looking for an extreme vacation, because it is here that the best places where you can try to do almost all kinds of water sports from water skiing, windsurfing to paragliding.

11. The Mausoleum of Che Guevara

This museum is the place of glory and repose of the most famous political figure of the Cuban Revolution, who influenced the revolution's course and left behind world history. This museum contains rare photos of Che because this world-famous man appears before us as a very multifaceted and diverse person., his famous beret and of course the monument on which the text of Che's farewell letter is reproduced. This tomb is one of the ten most-visited tombs in the world.

is considered one of the most beautiful caves in the Caribbean. It is located on the northern coast of the island. Without exaggeration, it is considered a treasure of Cuba, which was discovered in 1850. Walking through the majestic cave, you will plunge into the atmosphere with ancient stalactites and stalagmites. You will see ancient fossils, crystals, colourful calcareous deposits. Speleologists have discovered galleries located on several levels, extending about twenty kilometres, and the findings of palaeontologists are surprising. The skeletons of prehistoric animals and birds were found in the cave.

The original park area stretching 50 km from the Caribbean Sea to the mountains will surprise with its prehistoric highlight not only children but also adults. In this park, there are animals of the Stone Age. Such as dinosaurs and mammoths. Here you can plunge into the Stone Age.

Although this is a cemetery, do not be afraid, Colon Cemetery will surprise you not only with its sculptural compositions, tombstones and monuments, unusual legends. According to legend, one girl died in childbirth with her child. They were buried, and the child was laid at the feet of his mother. And when the time came to put them in the urn, as their custom says, it turned out that the child was no longer lying at the feet of the mother but in her arms. The girl was called "La Milagrosa" and considered miraculous. The girl became the patroness of mothers. Girls turn to her and ask for a child.

Completing the top spots in Cuba is a biosphere reserve with outstanding beauty and diversity. One of the most beautiful places to visit in Cuba, located not far from the capital of Cuba, about a hundred kilometers, ranked by UNESCO. Tourists from all over the world enjoy there thousands of species of orchids that are experimentally bred, extremely beautiful Cuba nature, mountains, and rivers. In addition to the beauty of the reserve, you will plunge into a pleasant climate, an abundance of incredible waterfalls, lakes. The Cuban people themselves call this place "the green paradise on earth". Cuba will conquer even the most avid traveller, because this is the country of eternal summer with its colorful underwater world, snow-white beaches, turquoise sea and bright attractive nature will not leave any tourist indifferent. It is the birthplace of the most famous rum, sugar, the best tobacco, and the only socialist republic in the West. An independent country with a long history.