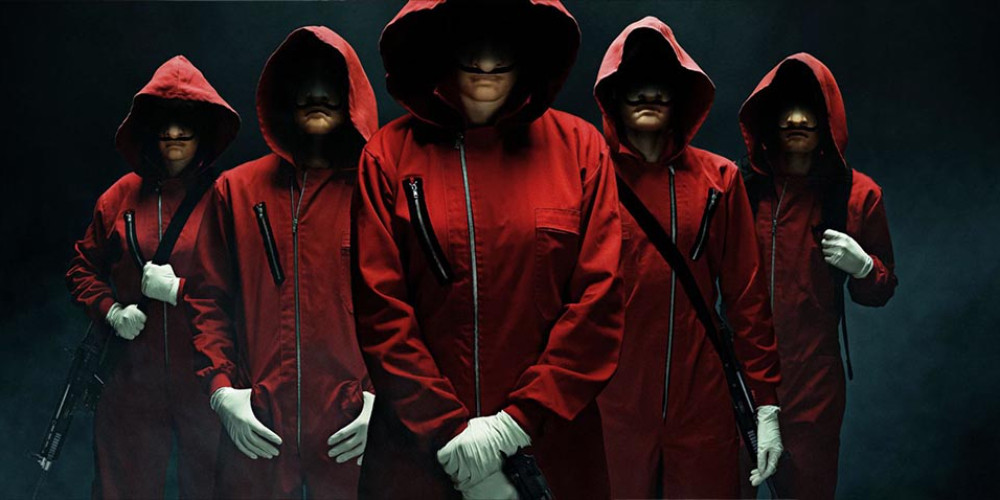 There is hardly anyone who does not know the  La Casa de Papel series that has attracted much public interest in recent times. Where to watch La Casa de Papel? Although the Spanish-made TV series was first to run on a local television channel, Netflix's acquisition of the series has gained worldwide recognition.

La Casa de Papel series talks about a group of people robbing a Royal Mint of Spain. La Casa de Papel means “The House of Paper” in English. As the name suggests, the group of robbers selects the House of Paper (a mint, a banknote factory) as a place for a robbery. In fact, it is also a question of whether it is a robbery. Are gang members really considered thieves? If they are considered a thief, from whom do they steal? After all, they print their own money and do not steal from the state budget. With these social messages, the series has attracted the attention of the audience. La Casa de Papel also provides social messages with red jumpsuits and the Salvador Dali masks worn by group members. Red jumpsuits were used in protest of communism, while Dali masks were used in view of Salvador Dalí's rebellious nature.

Where they filmed La Casa de Papel episodes? The events in the first two parts of the La Casa de Papel series took place at the Royal Mint of Spain. In the third part, events are taking place in the Central Bank of Spain. Significant portions of part 3 were also filmed in Italy, Panama, and Thailand, beyond the boundaries of the country. But La Casa de Papel was mostly filmed in Madrid, the capital of Spain.

So, the building mentioned in La Casa de Papel Season 1 - Fabrica Nacional de Moneda y Timbre (the building of the Royal Mint and Banknote Factory of Spain) is not exactly the same as the building in the series. As the place was not suitable for the filming, the shooting was done at the Spanish National Research Council, called CSIC. Unfortunately, this building is not open to the public and is only allowed to enter the courtyard. However, there is a numismatics museum inside the building of the real mint (Real Casa de Moneda), and it is allowed to enter. As the CSIC building where the La Casa de Papel Season 1 filming took place is located on Serrano Street (Calle Serrano), some of the outdoor scenes of the series are also filmed on this street. Besides, the estate where the robbers plan their coup was filmed is located in Torrelodones, 29 km from Madrid.

In La Casa de Papel Season 3, unlike the first, events have taken filmed along with Spain in Florence, Italy, on the coast of Guna Yala in Panama and in Thailand. Again, major events are taking place in Madrid, and this time Banco de Espana (Central Bank of Spain) has been selected. Banco de Espana is the central bank of Spain and is located on Alcala Street (Calle Alcala) in Madrid. Naturally, as it is not allowed to film in the main bank of the country, it was necessary to find a new bank building for the shootings and the Nuevos Ministerios, the building of the Ministry of Economic Development was chosen for the filming La Casa de Papel Season 3. One of the unforgettable scenes of the third part, A scene where the money is dropped from the sky was filmed at Callao Square (Plaza del Callao) in the centre of Madrid. It would be a lie to say that I was not sorry not to be there during this scene while I watched it. Other outdoor filming took place in the Tres Cantos region, near Madrid.

I would also like to note that the filming of La Casa de Papel Season 4 has just finished in August. Hopefully, they will be releasing the new part very soon, without keeping the followers looking forward.